Looking for Aramede isn't difficult as traversing Matar Road by night time, you'll definitely notice the whole area of Crowne Plaza engulfed in blue. It is very striking indeed but pleasant to the eyes.

Once you enter the main lobby, “Aramede” would actually be the first to greet you. The entrance is quite unassuming and I had expected a fancier façade  However, once you start walking towards the inner room, you slowly realize that the area is big and you get treated to an amazing centrepiece where the chefs grill and food is displayed around this center area. The music being played was comforting, not intruding.

Now let’s talk about food itself. We went around the center area to survey the food, taking note of what we think we’d like so we could come back for them later. The area is divided into sections for Salads, Appetizers, Pasta, Breads and cheeses, made-to-order Pizza, main courses, grilling station and desserts.

Wife and I started at the Grilling station, ordering some fresh prawns and Lamb Chops. While waiting for the grilled food, we tried their Pumpkin soup, some Maki and some of their various salads and appetizers.

My daughter found their made-to-order Pizza and ordered herself a basic mushroom and olive pizza. She also took some steamed vegetables and a serving of their Turkey, glazed in brown gravy before sitting back down.

The Pumkin soup was lovely. It had the right amount of creaminess that didn’t distract you from the flavor of the pumpkin itself. The only thing about it was that it was a bit gritty and the soup being smoother would have made it perfect.

The Maki were good but would have wanted more variations. By the time we finished with the Makis, the grilled Prawns and Lamb Chops arrived. The chops were sooo good and cooked to a perfect medium. They were tender and probably the best lamb chops I’ve had so far. I immediately had two!

As the Prawns were fresh, they tasted exquisite! I didn’t see any lemon butter dip so I got myself some butter which I let melt on the prawn and asked for some lemons which I drizzled on the prawns. It was like eating a steamed cob of corn with the saltiness of the sea. The meat of the prawn was wonderfully succulent and so delicious that I had 4.

Still wanting to try out the other main courses, my wife and I got ourselves a sampling of the Fish Curry, the Turkey in gravy, Stir-Fried Shrimps, and Beef Meatballs.

The meatballs were good. Nothing too fancy about them but still good. The Turkey was great as the meat was not dry and the gravy wasn’t overpowering the flavor of the meat itself. The Shrimp dish had more of an Asia-stir fry, mildly Mediterranean taste.

The shrimps were tender and not overcooked. Again, the sauce it had was complementary to the taste of the shrimps and doesn’t hide their savoury flavor. The most surprising was the Fish Curry. The curry was sweet but wasn’t close to other Indian-spiced curries or Japanese-inspired curries I’ve had before.

The curry sauce itself was to die for. What made it even better was that the fish wasn’t enveloped with the curry taste and was probably only added after the curry was cooked and ready so you get that clear taste and flakiness of fresh fish, enhanced by the balanced sweetness and spiciness of the curry. It would be perfect partner to some Nan bread or white rice.

We did enjoy the food at Aramede and would definitely go back. Service is always impecabble and the Duty Managers are visible and helpful.

And one of the winners of the Entertainer Mobile Apps is.....xtian001 :) TFS

I have the Entertainer app and I think it is there. But yes, I wouldn't pay 350 for a dinner with my wife. That's a bit too much I think

yes its a dinner buffet at crown plaza hotel the business park each monday at QR 175 per person, still i wont pay that much just to eat curries, its good for QR 95 only !!

Is this a buffet restaurant? How much did you pay per head? Does it serve alcohol?

Talabat partners with Booking.com to give customers 8 percent cashback on bookings 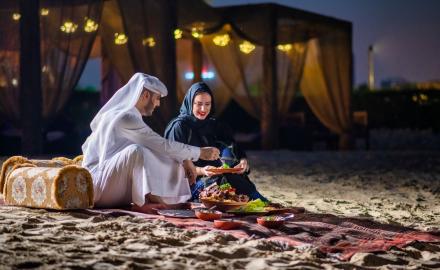