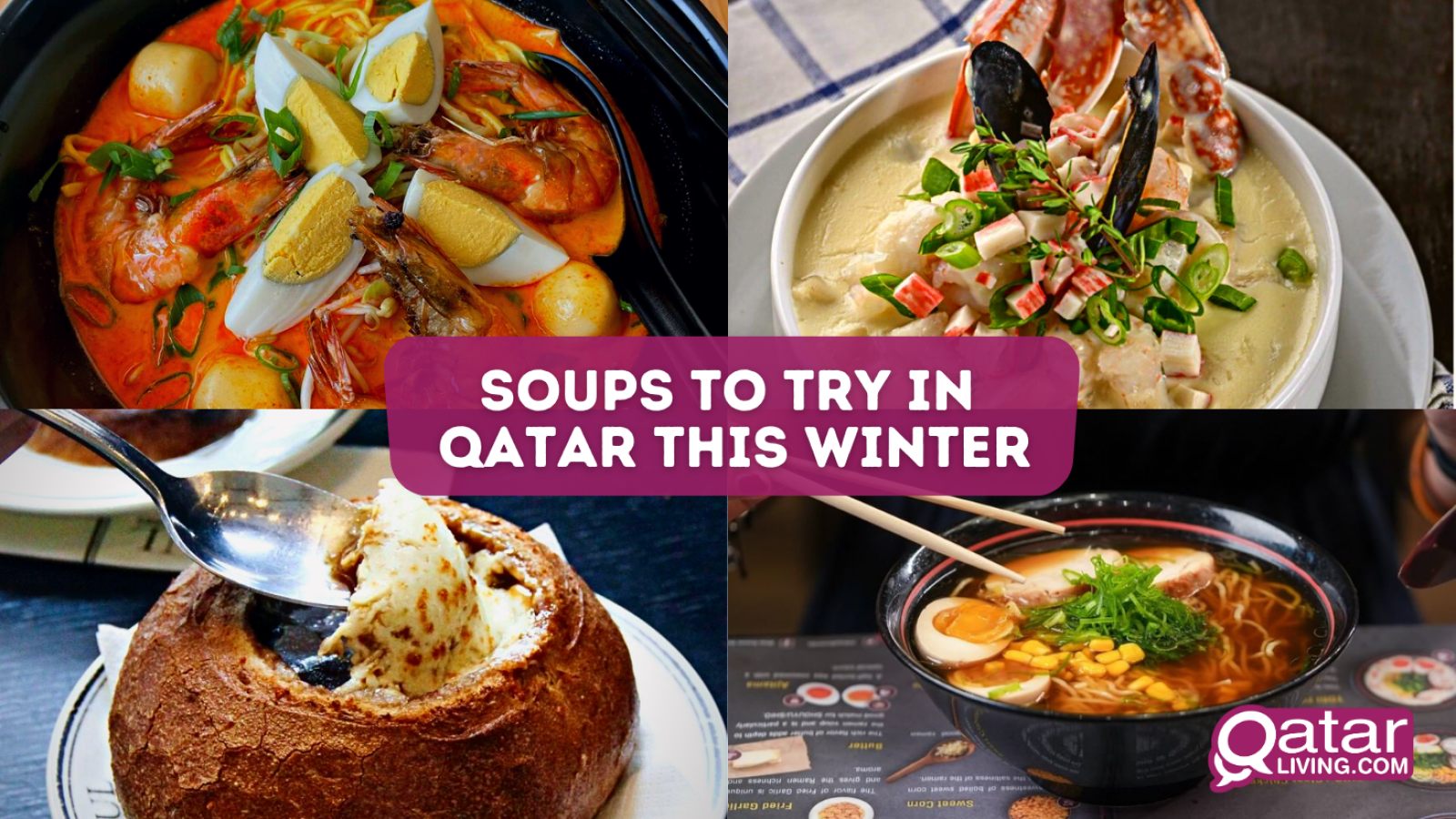 Soups to try in Qatar this winter

With temperatures dropping across Qatar, one of the best ways to keep warm is by enjoying an appetizing bowl of soup. Soups are packed with nutrients, flavorful and considered healthy to have during the winter.

A Japanese noodle soup, ramen is made of savory liquid broth, soft noodle and tasty toppings. The liquid base comes in either soy soup, clear chicken soup, creamy chicken soup or miso. Noodles are generally wheat based, and essential toppings include garlic, sweet corn, spring onion and charshu (chicken breast ham). A bowl of ramen is a hearty meal to have on a cold rainy day!

Recommendation: Ninja Ramen
Ninja Ramen is one of the few restaurants in Qatar that lets you customize your bowl of ramen. You can choose from different soup bases, toppings and extras to make a bowl of ramen that tantalizes your taste buds. 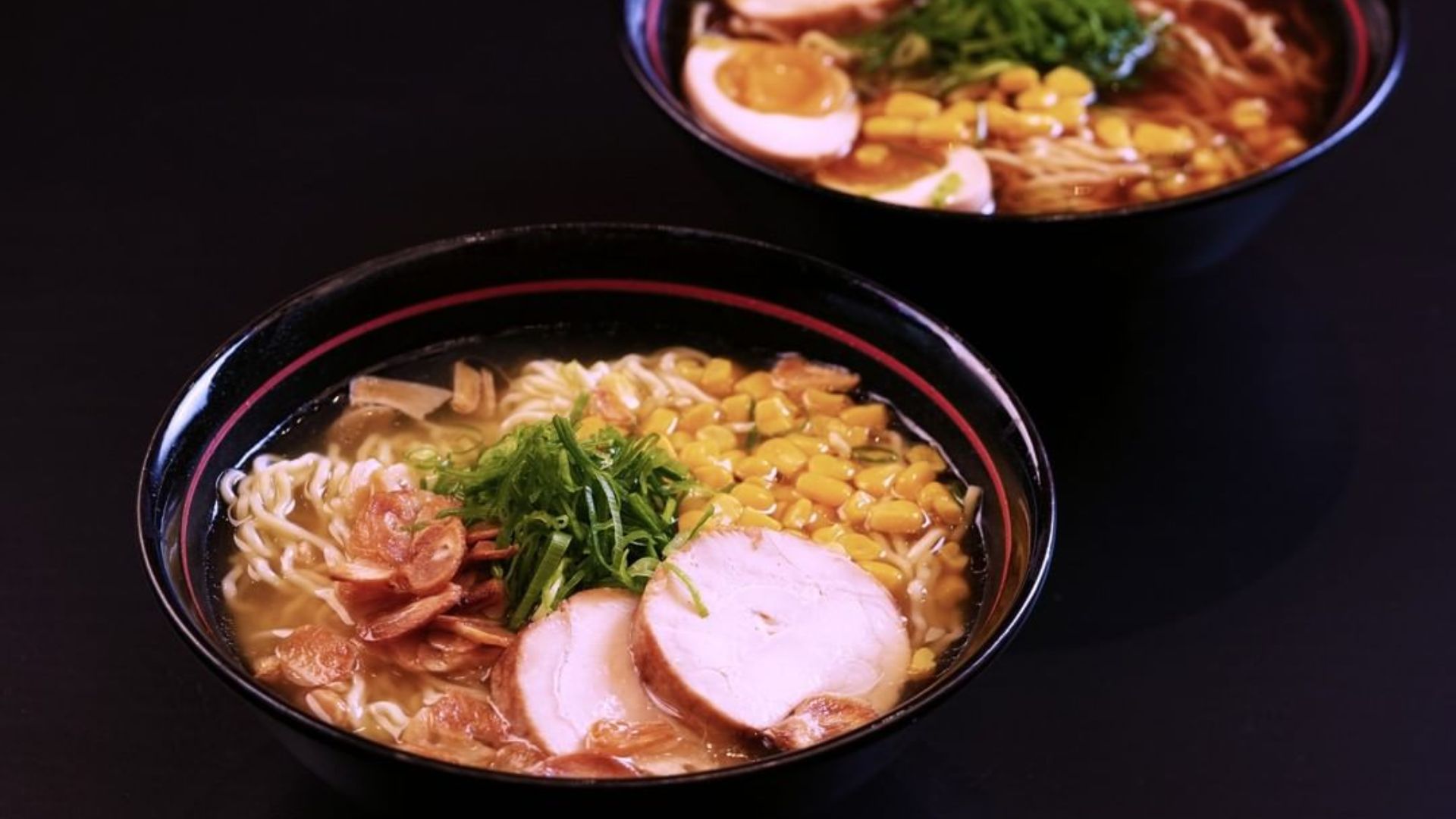 A spicy noodle soup hailing from Southeast Asia, laksa is a rich bowl of soup featuring Chinese noodles and Southeast Asian curries. Typically available in two varieties; curry laksa features a creamy coconut milk and curry paste base while asam laksa relies on a lighter broth making the dish an excellent comfort food for cold spells of weather, wherever you are.

Recommendation: Mama Rozie
Mama Rozie’s is a crowd favorite when it comes to authentic Malaysian and Indonesian cuisine. The laksa at Mama Rozie’s is a creamy Malaysian noodle soup cooked with traditional spices, served with homemade yellow egg noodles, topped with your choice of chicken or prawn, fish balls and boiled egg.

Rates: From QAR 32 to QAR 37 (Depending on addition of chicken or prawn)
Location: Al Muntazah 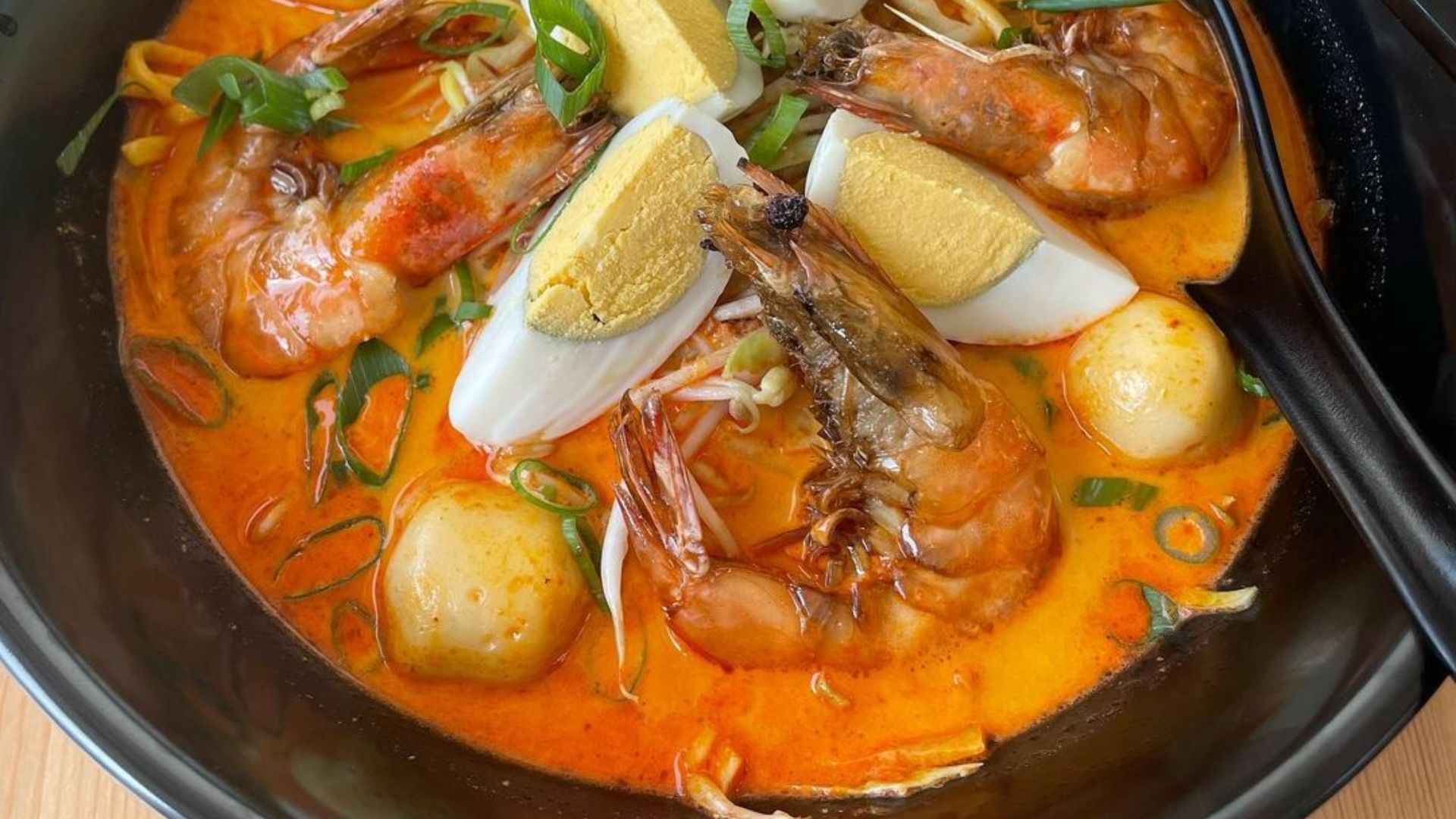 A popular dish in North American cuisine, this hearty bowl of soup generally features milk, onion and potatoes to form a hearty soup base, and is topped with different varieties of seafood making it a rich and flavorful dish to relish during winter. 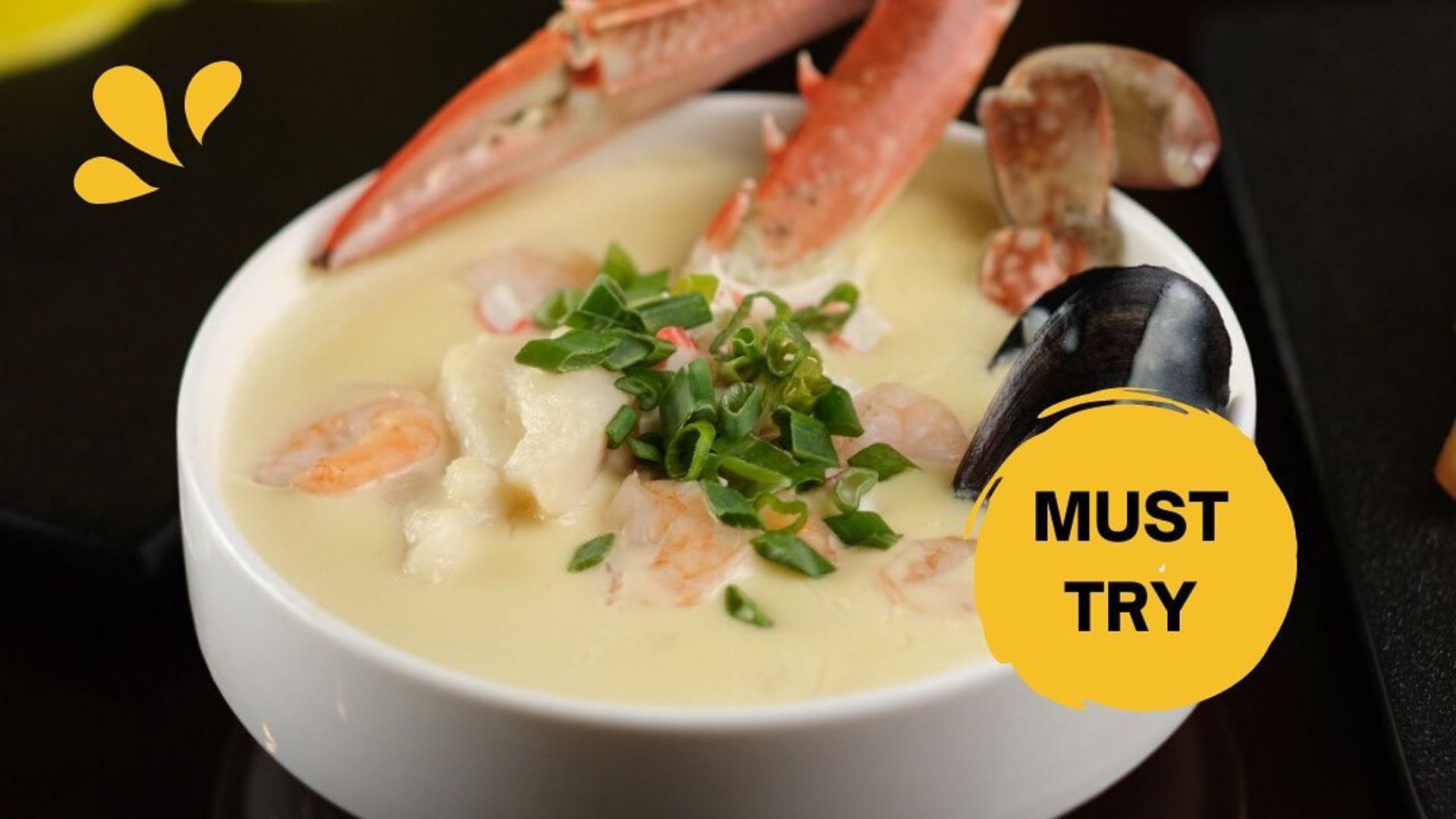 Hailing all the way from Thailand, tom yum is a hot and sour Thai soup, usually cooked in a prawn base and of two types; clear tom yum and creamy tom yum. The creamy version, referred to as ‘Tom Yum Kha’ includes a splash of coconut milk and chili paste added to the clear version of the soup referred to as ‘Tom Yum Goong’. The galangal and lemon-grass included in the tom yum enhances the tanginess and zest of the soup, and is considered go-to soup for an itchy throat or the sniffles that come with the colder season.

Recommendation: Busaba Bangkok Thai
A popular Thai restaurant in Qatar, Busaba serves both versions of the tom yum, a tantalizing treat for any season. 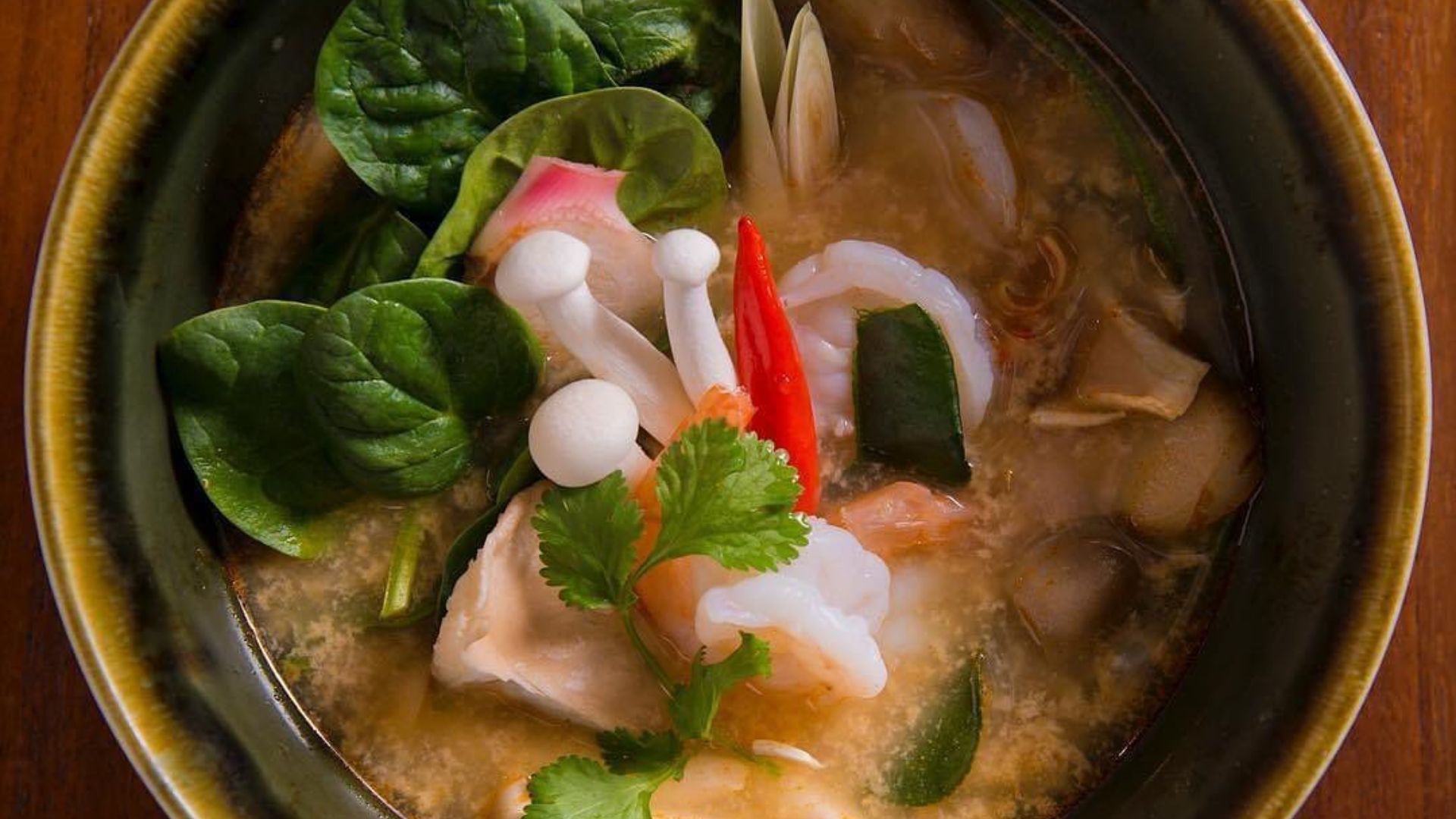 The modern day French onion soup is a popular staple in French cuisine and typically features a meat stock and onion base topped with bread and cheese, then gratinéed to a rich, creamy layer that’s an absolute delight. 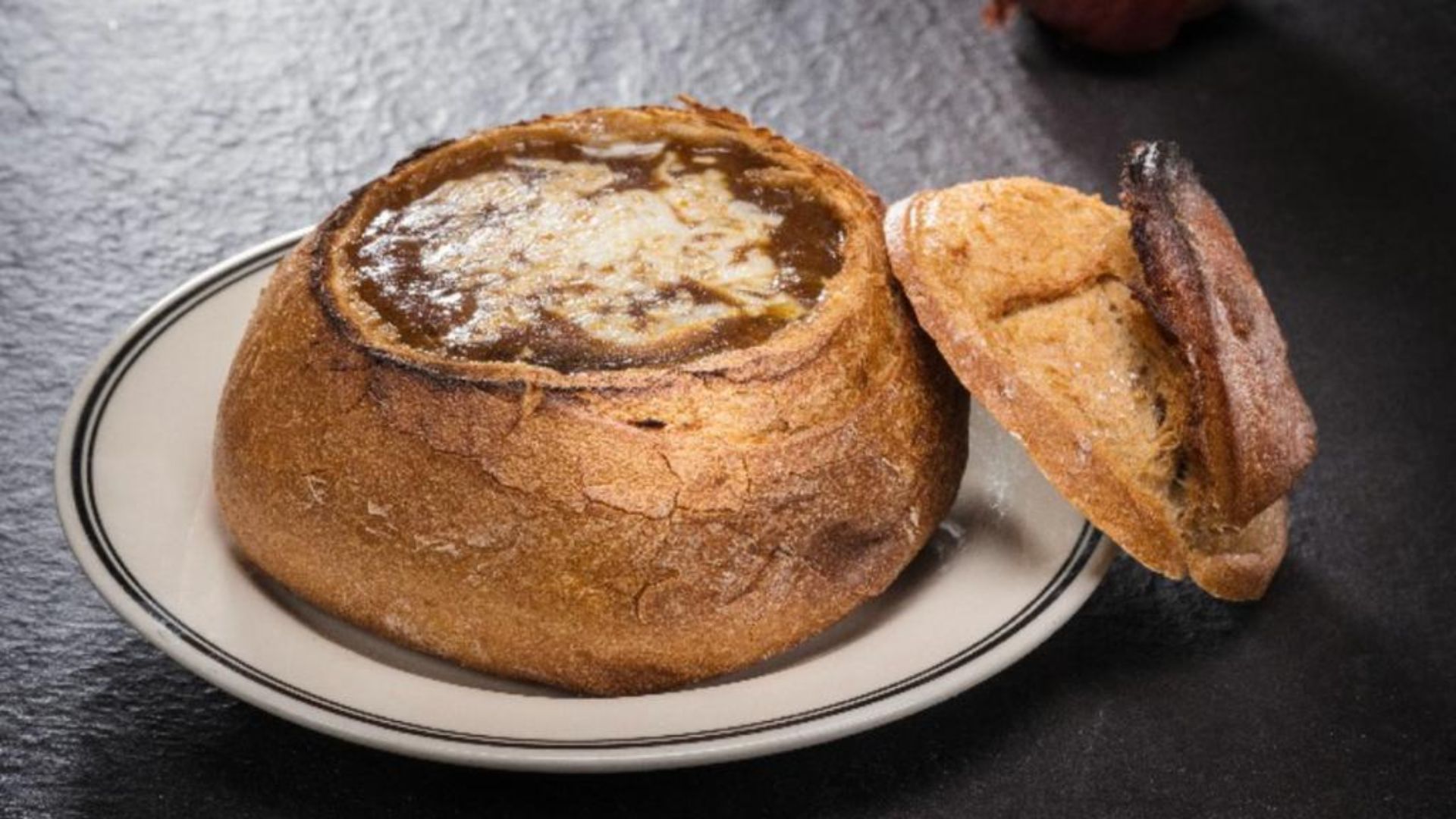 Popular throughout the Middle East, and widely favored around the world, lentil soup is predominantly made with a lentil base, onions, garlic and fresh greens. In some instances carrots, celery or tomatoes are added for extra flavor. The ingredients featured in the dish are packed with wholesome nutrients that is generally recommended year-round. 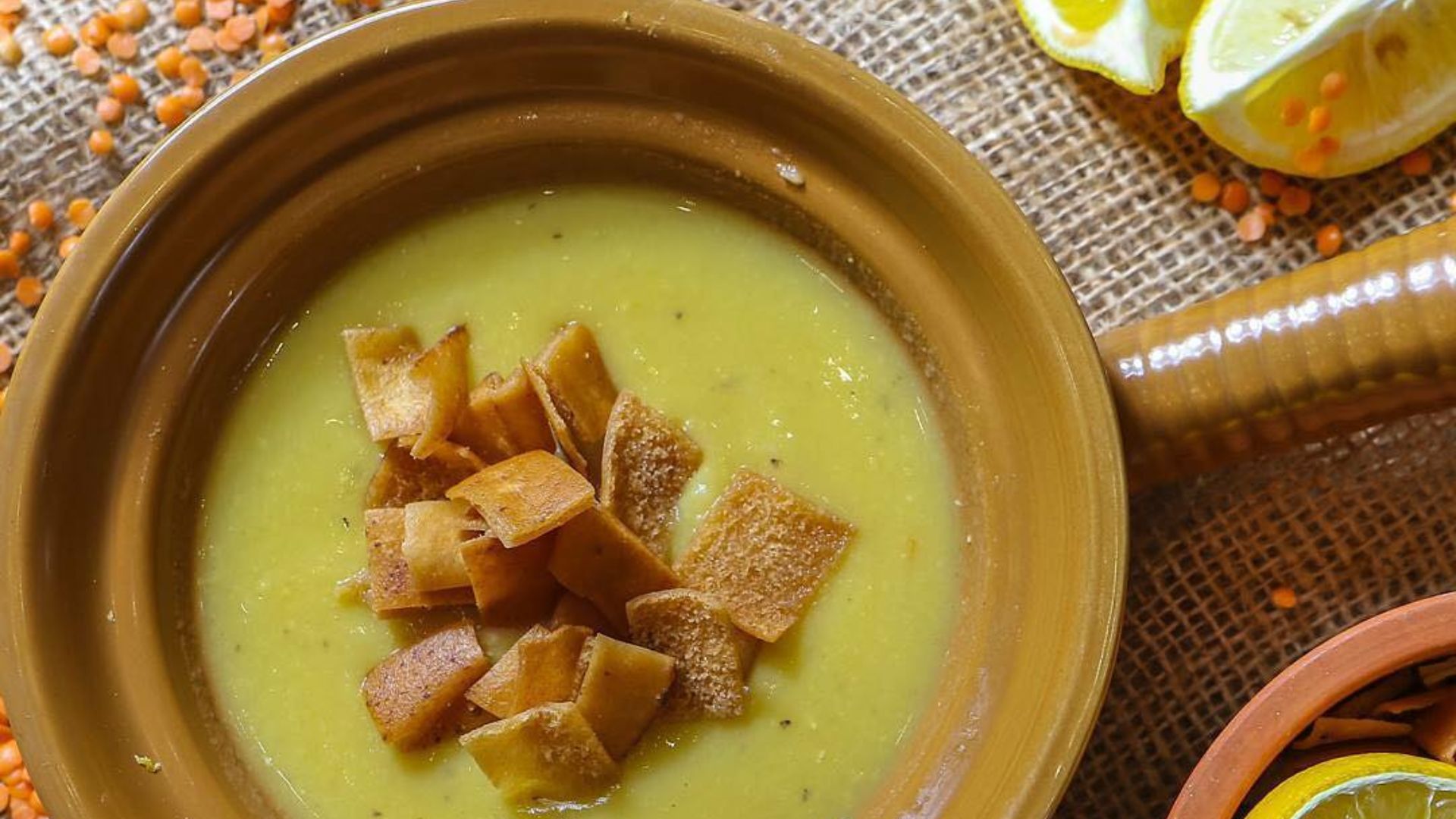 Originally from Morocco, Harira is popularly enjoyed in North Africa. Harira comprises a chickpea stew, durum wheat and toppings. The stew is cooked with tender pieces of lamb or meat, a variety of spices and a rich tomato broth.

Recommendation: Mssamen & Atai
The Harira at Mssamen and Atai is freshly prepared and served with dates and lemon, a crowd favorite in Qatar. 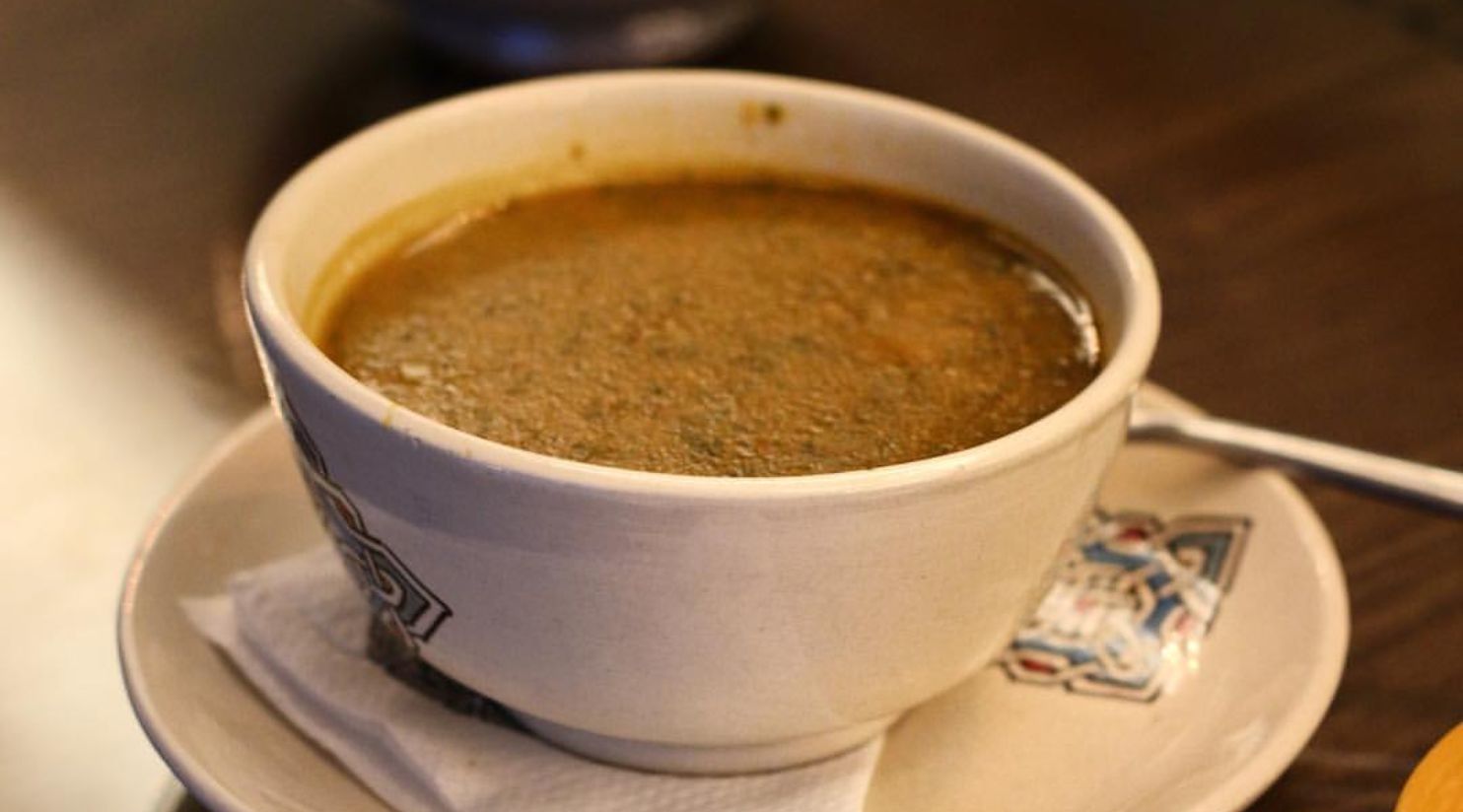 With Vietnamese origins, pho is a soup consisting of a bone broth, rice noodle and thinly sliced meat; sometimes served with an addition of bean sprouts, fresh herbs, limes and chilies. Topped with succulent pieces of braised meat, the Vietnamese pho is a delectable dish to be enjoyed this season. 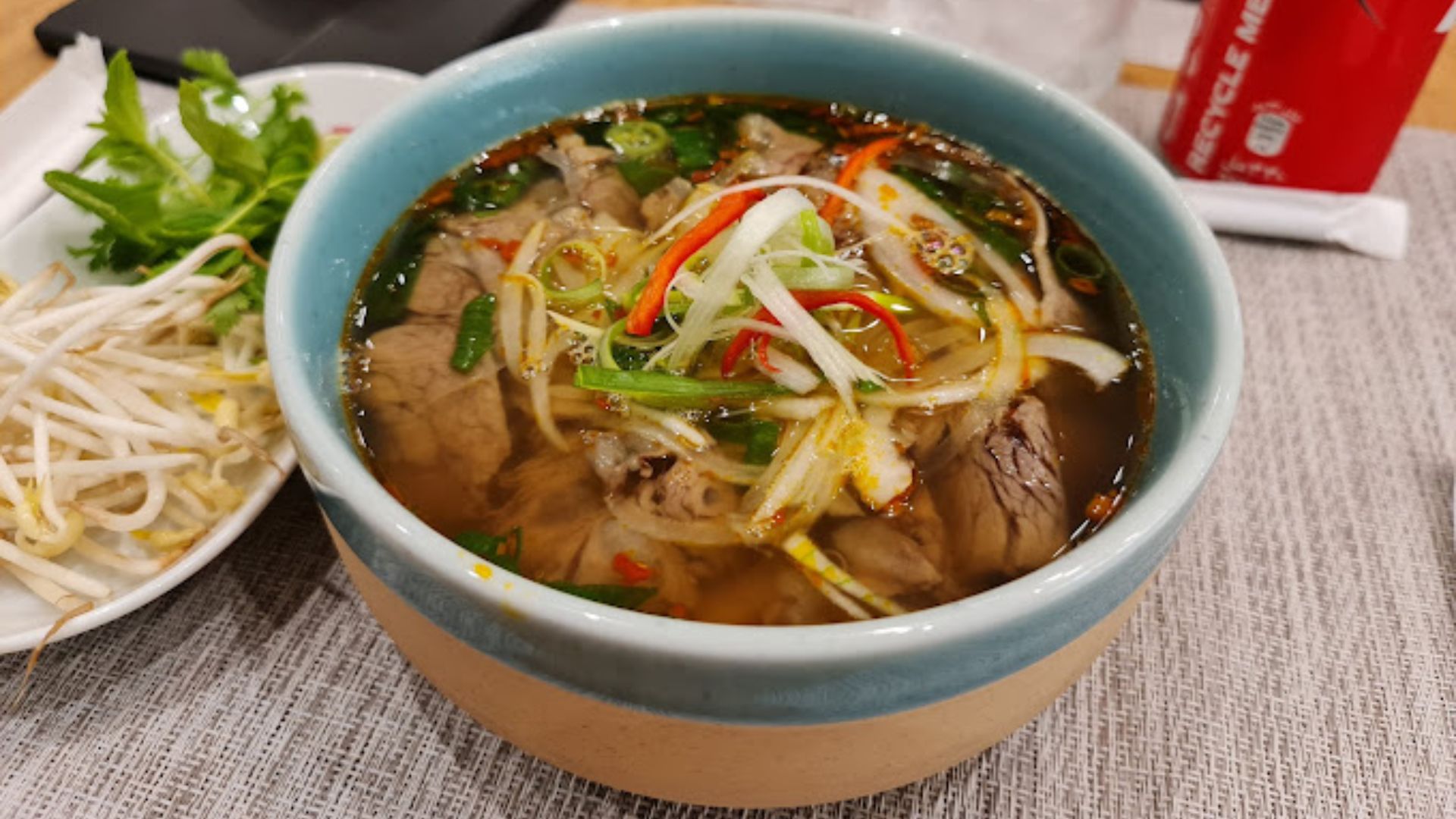 Hailing from the Philippines and alternatively referred to as beef shank soup, Bulalo is a light colored soup that is made of a light meat broth, leafy vegetables, corn on the cob, scallions, onions, garlic, ginger, and fish sauce.

Recommendation: Bos Geo Pares
Featuring a chunky piece of bone marrow and appealing toppings, the Bulalo at Bos Geo Pares is enjoyed year round by the Philippine community in Qatar. 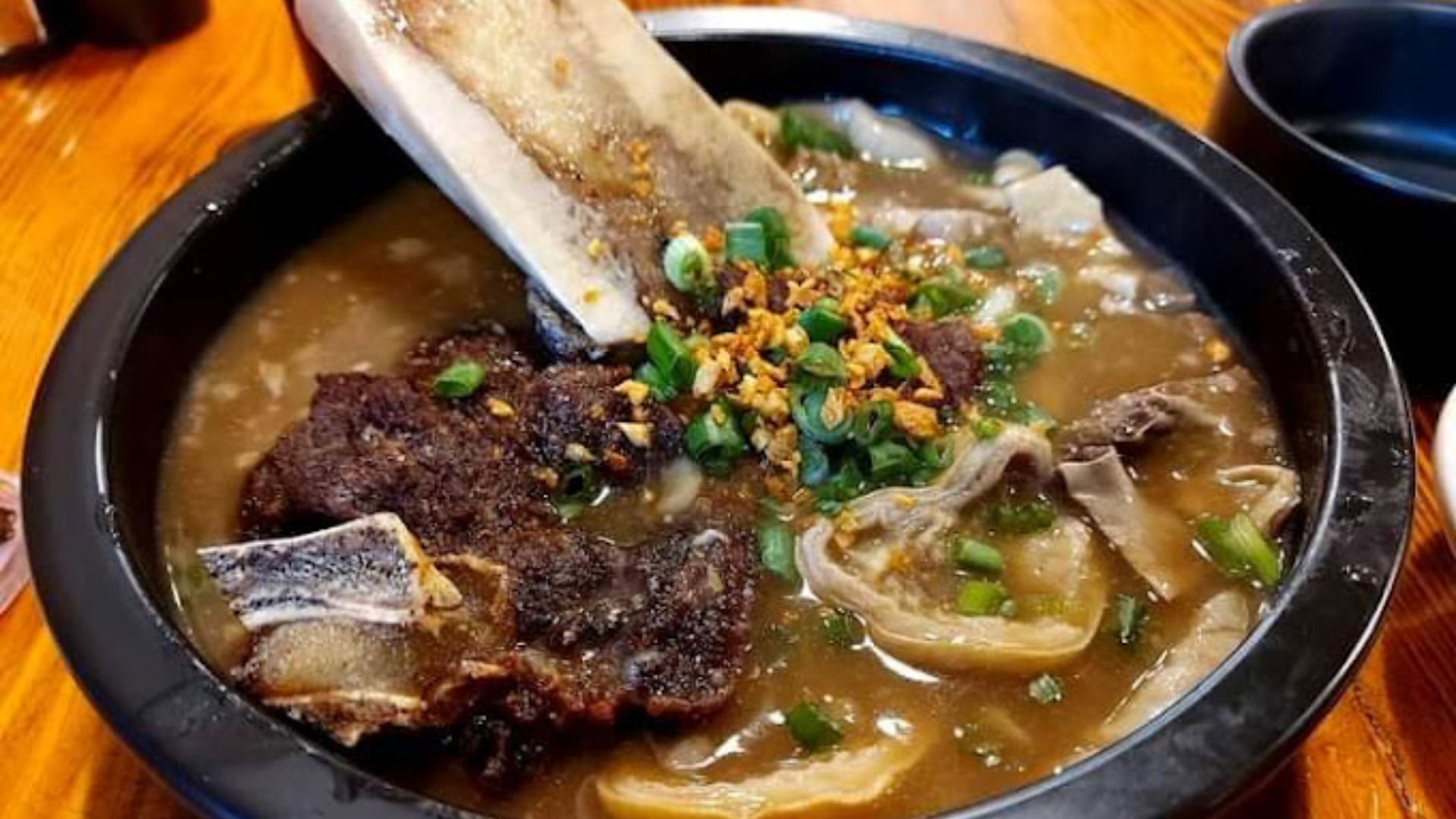 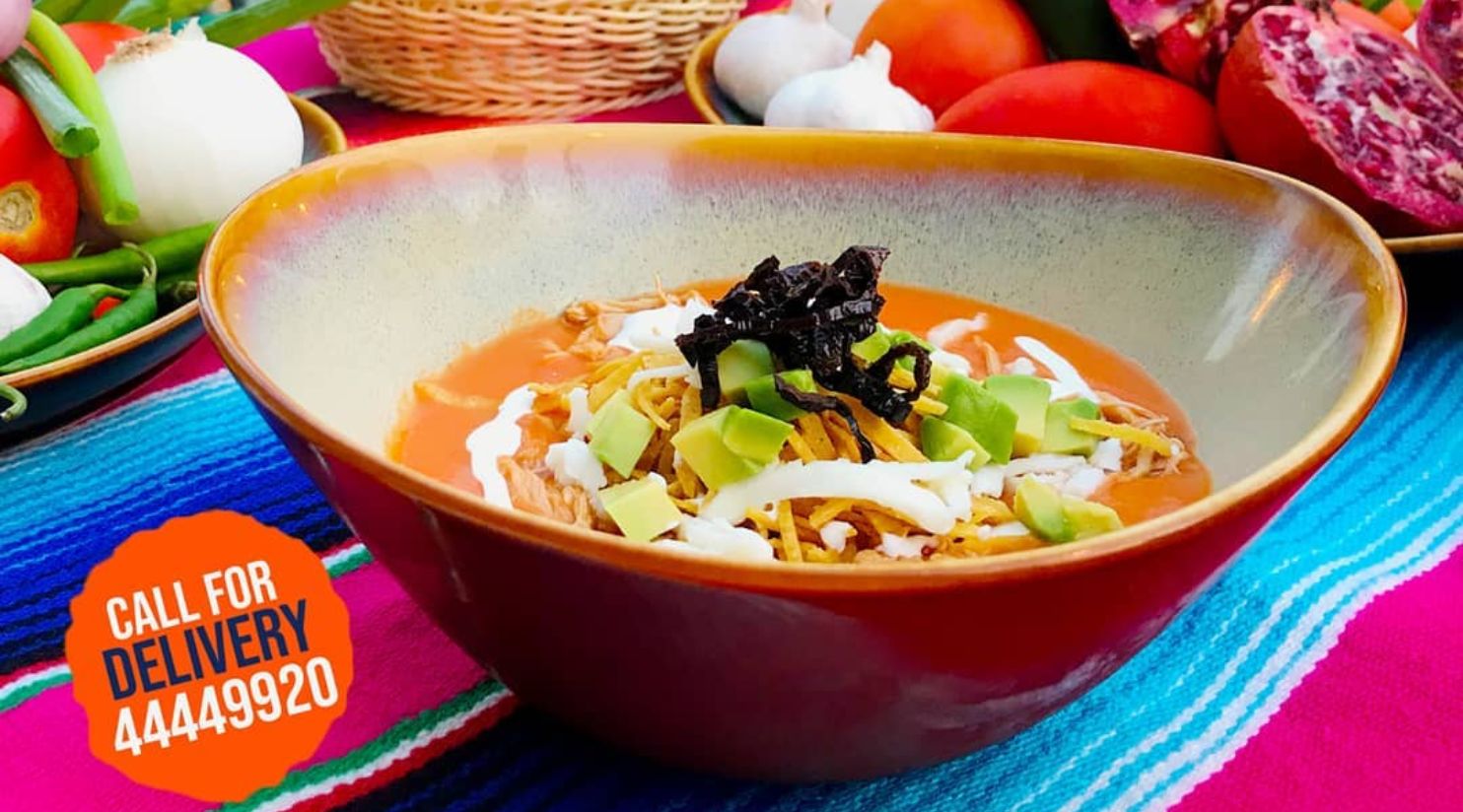 Looking for more options? Check out our list from last year featuring some crowd favorites in Qatar. 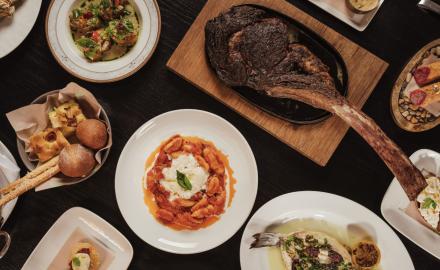 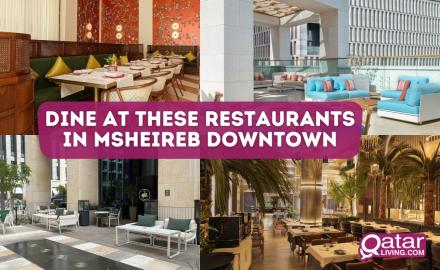 Dine in at these restaurants in Msheireb Downtown 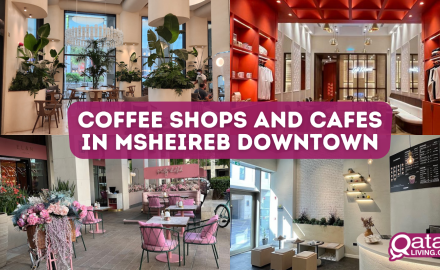