Rodrigo Tabata led the scoring with a hat-trick and Baghdad Bounedjah netted a double. Santiago Cazorla and Ali Asad were the other scorers as Al Sadd notched up their 13th victory to be on 41 points.

In all, a total of 15 goals were scored across all fixtures. Three matches produced drawn results, and red cards were shown to three players – Ibrahim Nasser Kalla of Al Arabi, Saeed Al Hajj of Al Gharafa and Mohanad Ali (Mimi) of Al Sailiya.

Al Duhail remain second on the table with 28 points, Al Gharafa stood third while Al Rayyan made the most of their 3-0 victory over Al Wakrah to move into the fourth position.

The QNB Stars League will now take a break and Week 16 fixtures have been scheduled for February 13 and 14. 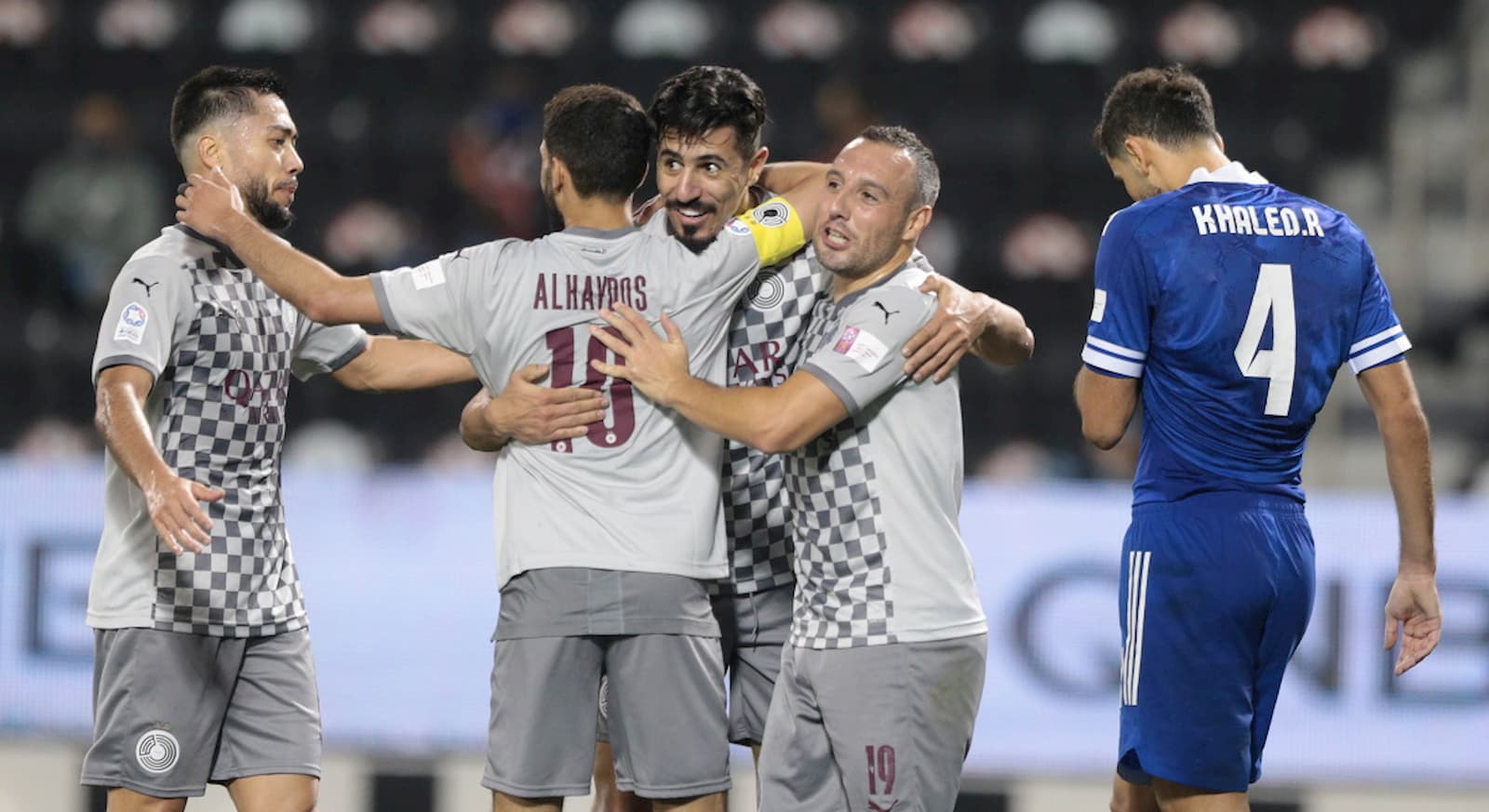 Rodrigo Tabata led the rout with a hat-trick (36th, 49th and 57th minutes), while prolific scorer Baghdad Bounedjah contributed two goals (seventh and 33rd minutes). Santiago Cazorla (41st-minute penalty) and Ali Asad (71st minute) were the other scorers as Al Sadd notched up their 13th victory to be on 41 points.

Al Sadd thus opened up a 13-point lead over second-placed reigning champions Al Duhail (28 points), who were held to a 1-1 draw by Qatar SC on Tuesday.

Al Sadd have also registered the most number of victories and they are the only unbeaten side so far in the tournament.

The only time they had dropped points this time were when they drew goalless with Al Khor in the first leg (Week 4) and played out a 1-1 draw with Qatar SC in Week 11.

Al Sadd subdued their rivals with 61 per cent possession, unlike their first-leg game against Al Khor when both teams failed to break the deadlock.

Such was their dominating game that Al Sadd took the half-time break on a four-goal cushion. The penalty was awarded when Al Khor’s Tamer Jamal fouled Al Sadd’s Akram Afif and referee Meshari Ali Al Shammari pointed to the spot. And Cazorla was on hand to convert the kick.

There was no let-up by Al Sadd in the second half and they pumped in three more goals. 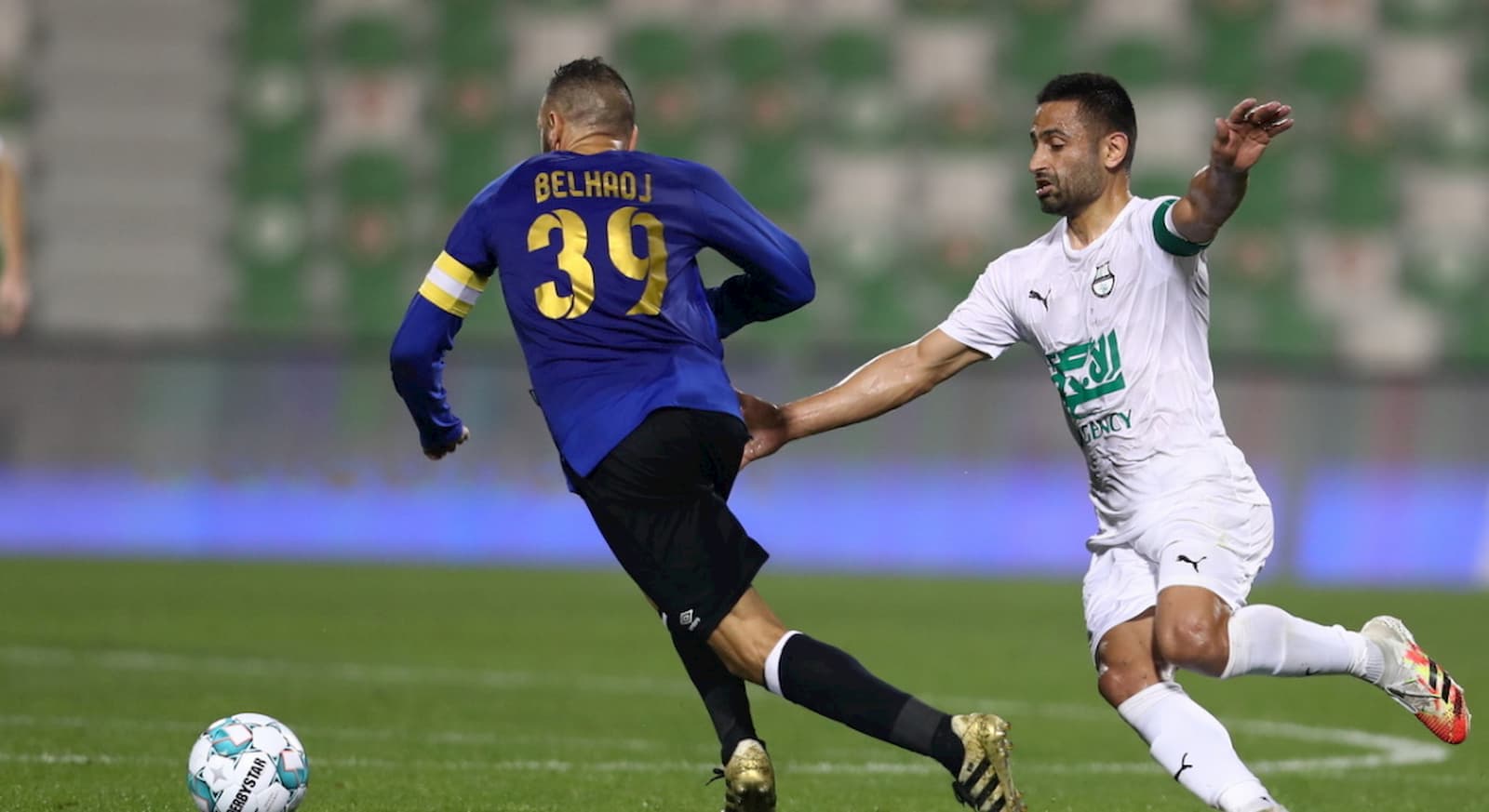 Al Sailiya and Al Ahli shared points after a goalless draw at the Al Ahli Stadium on Wednesday.

Al Ahli, with their second draw this season, have a tally of 23 points whereas Al Sailiya, following their fourth draw, are now on 19 points.

Al Sailiya played with 10 men almost all through the game as their Iraqi striker Muhanad Ali (Mimi) received a red card for a foul on Al Ahli’s Mohammed Al Naimi in the second minute.

In the ninth minute, Mohammed Diame opened up with a solo effort from the Al Sailiya box, but the tall striker’s powerful shot caught a deflection and flew past the goalmouth

Al Sailiyah also wasted little time in creating chances in the 13th minute. Rami Fayez produced a close-range shot that was blocked by a defender and then team-mate Tiago Bezerra also aimed at the goal, but his shot hit the outside of the net from close range.

Early in the second half, Tiago Bezerra headed home off a corner kick but his deflection landed on top of the Al Ahli net. In the 50th minute, Al Ahli’s Perez also headed from close range, but keeper Amine parried the ball with a jump.

On the hour mark, Perez charged into the Al Sailiya box and unleashed a left-footed drive that crashed into the outside of the net. In the 70th minute, Tiago of Al Sailiya ramped up the pressure on the boys in white but his powerful shot from the edge of the box was deflected by keeper Yazan.

Ten minutes later, El Zhar clipped a shot just as he neared the Al Sailiya box, but his drive was blocked by an Al Sailiya defender. 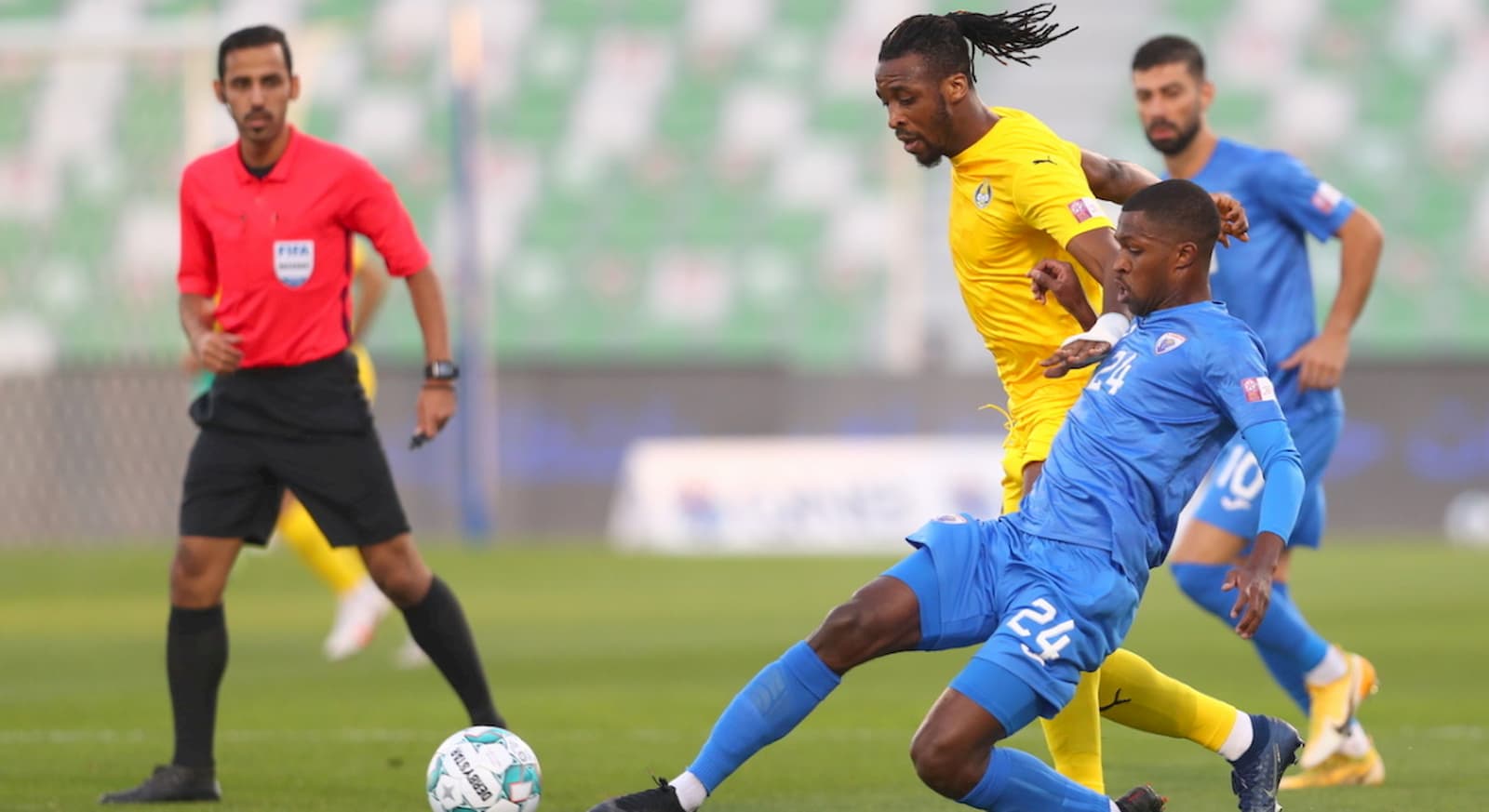 Al Gharafa rallied from a goal down to beat Al Kharaitiyat 2-1 at the Al Ahli Stadium on Wednesday.

After a goalless first half, the match picked up frantic pace in the second as Al Gharafa dominated proceedings with relentless attacks.

After Mensah Evans put Al Kharaitiyat ahead in the 70th minute, Al Gharafa captain Moiad Hassan (77th and 79th minutes) scored two goals in quick succession to give his side their eighth win of the season.

Al Gharafa underlined their intentions from the word go. In the fifth minute, Jonathan Kodjia produced the first attack on Al Kharaitiyat. The tall Ivory Coast striker launched a tracer bullet along the pitch from the edge of the box, but Al Kharaitiyat keeper Shehab Ellethy dived to his left to block the move.

A bit of drama unfolded in the 64th minute. Saeed Al Hajj brought down Mohammed Osman Nawaf close to Al Gharafa box. The referee initially flashed a yellow card but reversed it to a red after a VAR referral. Al Kharaitiyat failed to score from the direct free-kick.

In the 70th minute, Majed Aman picked out Evans Mensah with a neat lob from the center. Evans charged into the box and fired a shot that caught a slight deflection of a dive by Al Muhaza and went into the net giving the keeper no chance to stop the ball.

Al Kharaitiyat’s euphoria was shortlived as Al Gharafa captain Moiad Hassan curled in a David Beckham-like free-kick to score the equalizer in the 77th. Two minutes later, Hassan volleyed home from inside the box after a cross by Yousef Muftah to give Al Gharafa the lead. 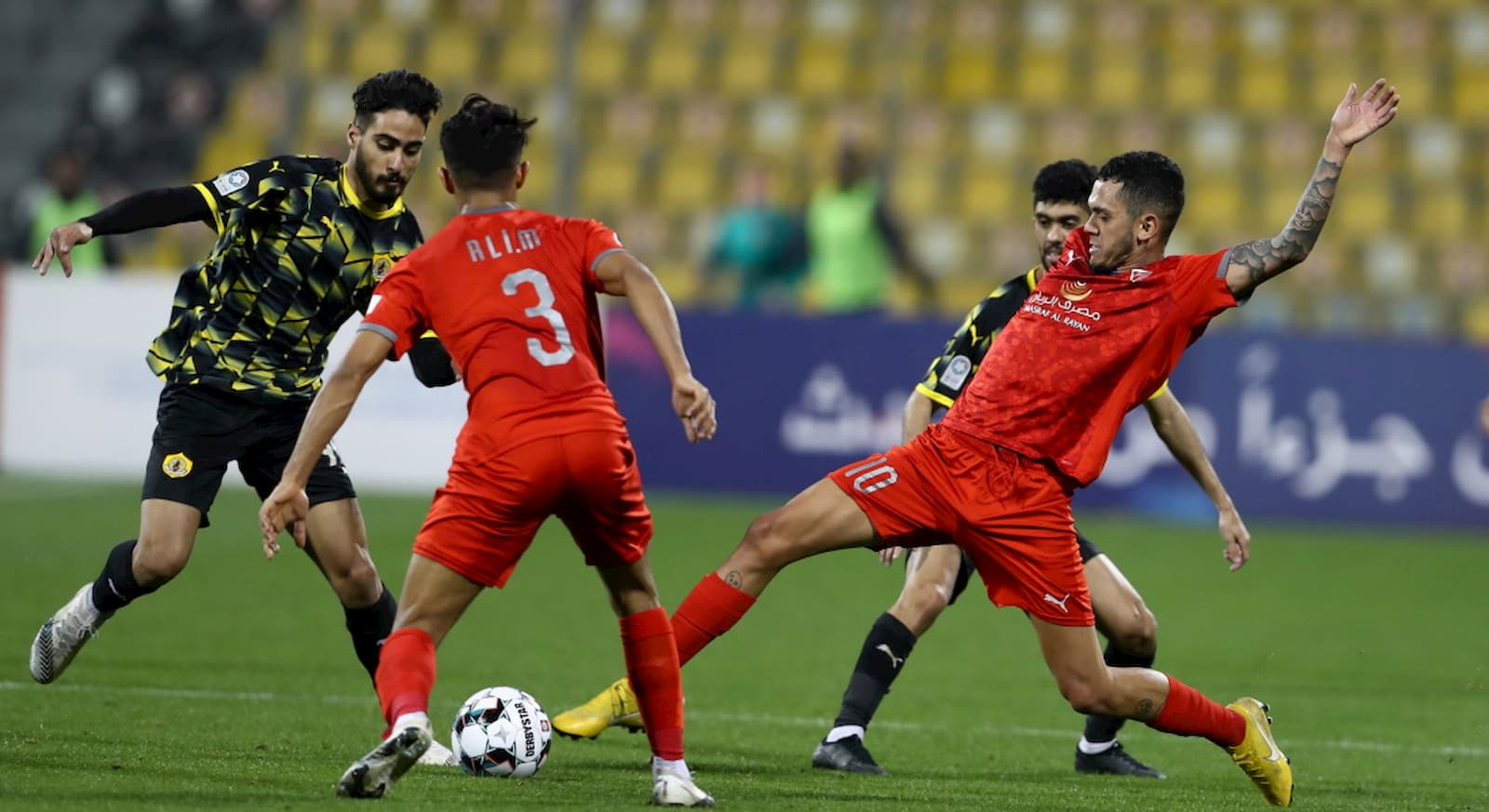 Qatar SC held holders Al Duhail to a 1-1 draw at the Qatar SC Stadium on Tuesday.

Paulo Edmilson Junior netted the goal for Al Duhail in the 51st minute.

The result was another blow to second-placed Al Duhail (28 points) who lag behind leaders Al Sadd by 10 points, as the latter play Al Khor on Wednesday.

Al Duhail dominated the early exchanges, but Qatar SC soon settled into their stride. As a result, the highlight match of the week, pitting strong opponents against each other, lived up to its billing.

Qatar SC made their intentions clear and Anthony Okpotu’s effort went out past the outstretched hand of Al Duhail goalkeeper Salah Zakaria in the 19th minute.

Soon, a charging Qatar SC player Hamed Ismail was fouled by Al Duhail defender Mehdi Benatia inside the box and referee Khamis Al Marri awarded a penalty, which was converted by Barrahma.

Eduardo Rodriguez (Dudu) was the player who got more chances on Al Duhail side as he came close to equalizing on many occasions. He was either thwarted by Qatar SC goalkeeper Jassim Al Hail or he was off-target.

The Al Duhail duo of Abdullah Al Ahrak and Edmilson too made attempts at the goal.

Al Duhail came on for the second-half action by making three substitutions. New recruit and striker Michael Olunga, winger Ismail Mohammed and defender Mohammed Moosa took the field to strengthen their ranks and they equalized, with Edmilson brilliantly heading in a cross from deep in the left by Sultan Al Breik.

With both teams being on par in terms of score, some tense moments followed.

Al Duhail further strengthened their attack line by replacing Almoez with Mohammed Muntari, but the game did not see another goal, as Barrahma’s free-kick in the 79th minute made its way out.

Umm Salal and Al Arabi played out a goalless draw at the Al Duhail Stadium on Tuesday.

Umm Salal and Al Arabi are now on 15 and 20 points respectively. It was the second successive draw for both teams.

A flurry of exchanges were witnessed, especially in the first half, but neither side could find the target.

For Al Arabi, captain Aron Gunnarsson led from the front by playing the entire 90 minutes with his

Al Arabi played with 10 men from the 37th minute after Ibrahim Nasser Kalla was shown the red card for tugging the jersey of Ahmed Hammoudan, who had picked up a loose ball and charged into the rival box. Referee Saoud Ali Al Athba wasted little time in giving marching orders to Kalla though Umm Salal wasted the free-kick taken from the edge of the box.

However, Umm Salal failed to capitalize on the numerical advantage.

The second half also saw both teams create chances which, however, did not bear fruit. In one instance, in the 77th minute, Torabi delivered a cross from the right wing and Malick fumbled with the ball. Soria, stationed within striking distance, attempted to tap the ball into the net, but ended up hurting the goalkeeper.

Both sides failed to break the deadlock even as coaches made a flurry of substitutions. 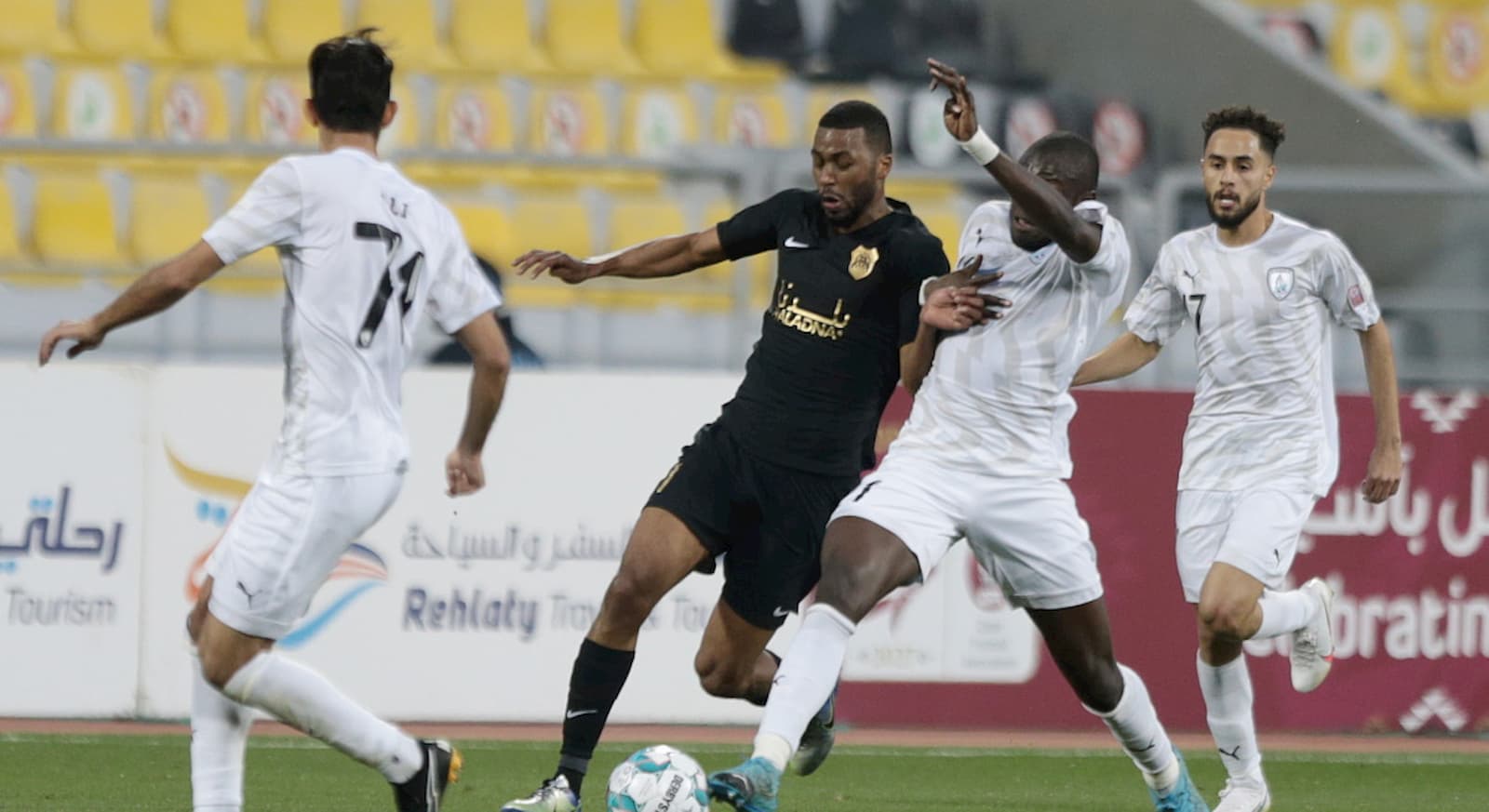 With the win, their seventh overall, Al Rayyan moved on to 25 points. It was Al Rayyan’s third successive win under new coach Laurent Blanc.

After a steady start, Al Rayyan launched their first major threat in the 10th minute. Khalilzadeh jumped high for a snap-header off a corner kick, but the Iranian lost his balance as he bumped into Al Wakrah defender Abdulghani Muneer.

Abdelaziz Hatem curled in a free-kick that dipped on Kom dived in front – beating his marker Lucas Mendes – to slip the low ball to the left of goalkeeper moments before the end of the first half.

Al Wakrah responded well with a few co-ordinated attacks in the first few minutes of the second half, but the Al Rayyan backline held firm to thwart any danger.

In the 62nd minute, Boli made it 2-0 for Al Rayyan. Boli, marked by Mendes on the right and Mohamed Aiash on the left, picked up a long cross from his own half. Mendes tried to clear the dipping ball, but could not. Boli showed great speed to reach the ball first and then tap it above the head of an advancing goalkeeper.

A couple of minutes later, Abdulrahman Mohamed produced a left-footed drive from the edge of the box, but Al Rayyan keeper Fahad Younis dived to his left and parried the ball away.

In the dying seconds of the match, Khalilzadeh headed home from close range sending the ball into an open net after Al Wakrah keeper had stepped out of his own box to block a long-range cross.