Iran has test-fired a series of medium- and longer-range missiles that put Israel, parts of Europe and US bases in the Gulf within potential striking range.

The White House called the move "provocative" but Iran's foreign ministry said the tests were merely part of an annual military drill, and were not a reaction to the nuclear crisis.

Iran insists that all its nuclear facilities are for peaceful energy purposes and rejects accusations from the US and others that it is seeking a nuclear weapon.

US President Barack Obama has hinted at pursuing tougher sanctions against Tehran if progress over the crisis is not made.

Russia recently signalled it might be prepared to soften its opposition to further sanctions.

China, which is also a permanent Security Council member, has said such pressure would not be effective.

.
.
.
Iranian representatives will meet in Geneva on Thursday for talks with the five permanent Security Council seat holders - the UK, China, France, Russia and the US - plus Germany; the so-called P+1.

I Ran... When I heard the news

By snowflakeinqatar• 12 years 3 months ago.

Emperor Mohammed Reza Pahlavi? Or would they need another charm and guts of Princess Soraya Esfandiary?

Did how many of you believe US will attack Iran, US will not repeat the same mistake did with Iraq, and the result also not will the same with Iran.

US do not have fund even for medicine this days, they having a big financial crisis,

No more war fund, required donation, for that.

By snowflakeinqatar• 12 years 3 months ago.

How strong can Iran be? Looks like these war games are actually psychological games.

USA/Israel- Iran conflict is all fake.

Iran is too weak militarily and is just another part of the globalist status quo: puppet regime, forment hatred to keep the masses under control, deal in slavery, drugs, and weapons.

how the fight started!!!

By QLNews·0·3 weeks 8 hours ago
The programme includes art workshops, gallery visits, and training that inspire creative interaction among the local community

By Qatar Living·1·3 weeks 1 day ago
Research studies and surveys conducted by experts depict a sharp rise in anxiety and depressive cases among people. Experts have stressed that it is crucial to take care of one’s emotional well-being too, apart from physical health.

By Qatar Living·0·3 weeks 5 days ago
Katara reveals the three categories of the Festival: Arabian Peninsula Horse Show: Arabian Horse Auction, and the Title Show. The festival will kickstart from 2 February, 2022

By Qatar Living·0·3 weeks 5 days ago
The Ministry of Public Health has updated the country lists on the 28th of December based on Covid-19 risks and the Travel and Return Policy. The updates will come into effect at 7 pm on January 1, 2022.

By Qatar Living·0·4 weeks 8 hours ago
With 2022 just around the corner, we're all wrapping up the remaining bits of 2021, QL's team has their very own New Year's Resolution that we plan to keep and convince others to join too!
Post to Forum
Sponsored Posts 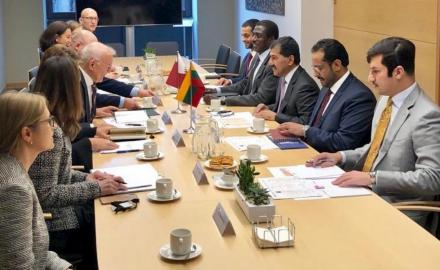