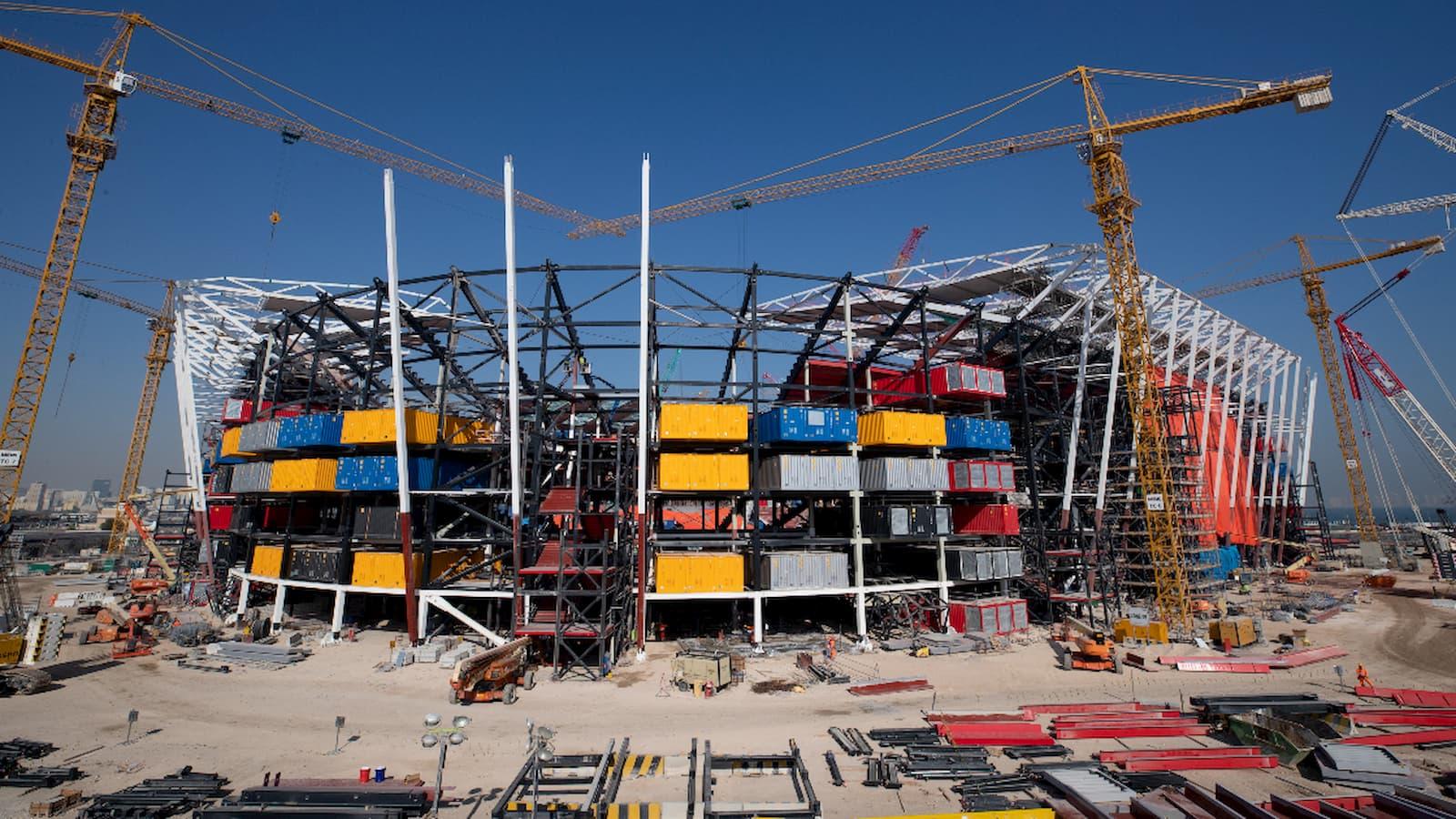 With less than two years to go until the FIFA World Cup Qatar 2022, the Supreme Committee for Delivery & Legacy made major progress in stadium delivery during 2020.

One of the major highlights of last year was the virtual launch of the Education City Stadium, which took place amidst protective measures implemented by the State of Qatar to prevent the spread of COVID-19. The stadium’s successful completion was dedicated to frontline workers who have worked tirelessly during the ongoing pandemic.

Later in the year, on Qatar National Day, and in the presence of His Highness the Amir Sheikh Tamim bin Hamad Al Thani, Ahmad Bin Ali Stadium was unveiled to the world in a spectacular ceremony. This was during the 48th Amir Cup final -- making it the fourth fully operational Qatar 2022 tournament venue to be inaugurated.

Four more stadiums are being constructed for Qatar 2022, with Al Bayt Stadium in the final stages of delivery.

All the venues will be completed and tested well in advance of the tournament, which kicks off on 21 November 2022.

Here is a rundown of the latest progress update from each of the stadiums. 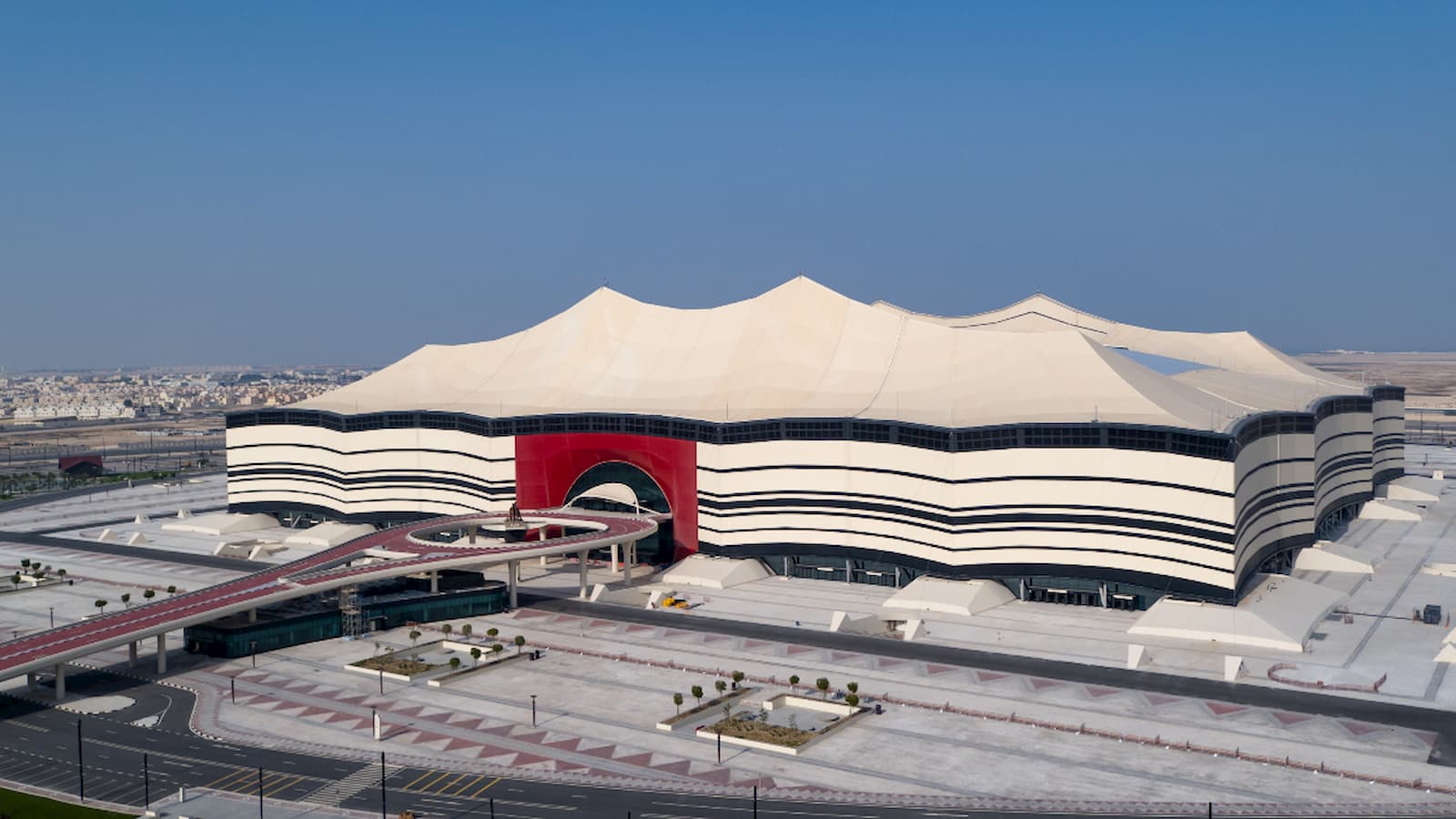 A remarkable sight will welcome fans to Al Bayt Stadium, which is being delivered by Aspire Zone Foundation. Designed to represent Arab hospitality, the venue will host nine matches through to the semi-finals stage of Qatar 2022 and is covered by a structure resembling a traditional Arab tent known as 'bayt al sha'ar', complete with a state-of-the-art retractable roof.

Construction update: The stadium structure has been completed and is ready to host matches. This includes the laying of the stadium pitch in world record time. This year, the venue achieved a high sustainability rating from the Global Sustainability Assessment System (GSAS). The surrounding Al Bayt Park opened on Qatar National Sports Day in February. 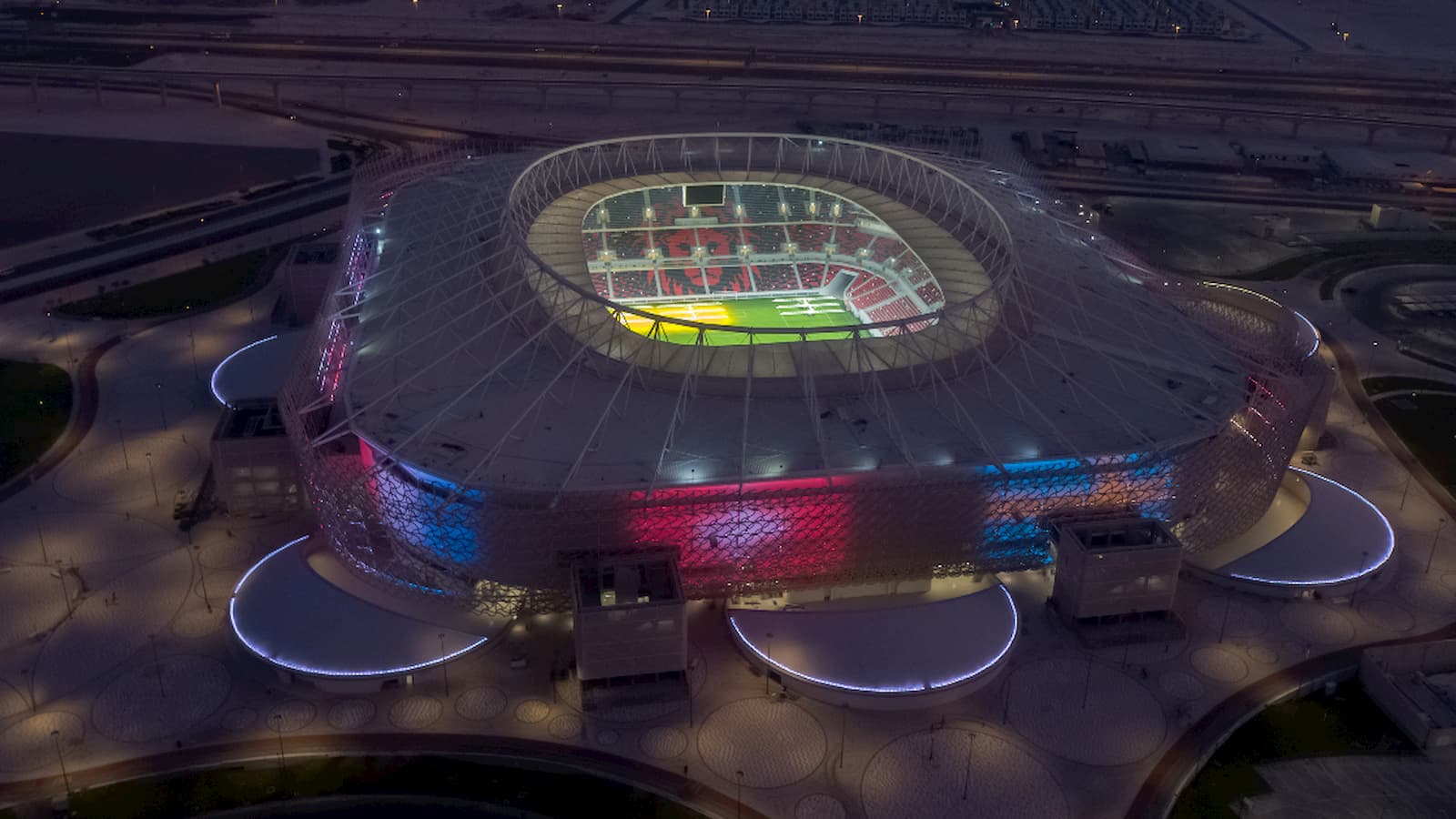 Located in Al Rayyan, Ahmad Bin Ali Stadium is built on the site of a deconstructed stadium, with the new venue adjacent to the Mall of Qatar and within walking distance of Al Riffa Station – on Doha Metro’s Green Line. The stadium’s glowing façade is comprised of patterns that characterize different aspects of Qatar: the importance of family, the beauty of the desert, native flora and fauna, and local and international trade. A fifth shape – a shield – brings together all the others, representing the strength and unity that is particularly relevant to the desert city of Al Rayyan. 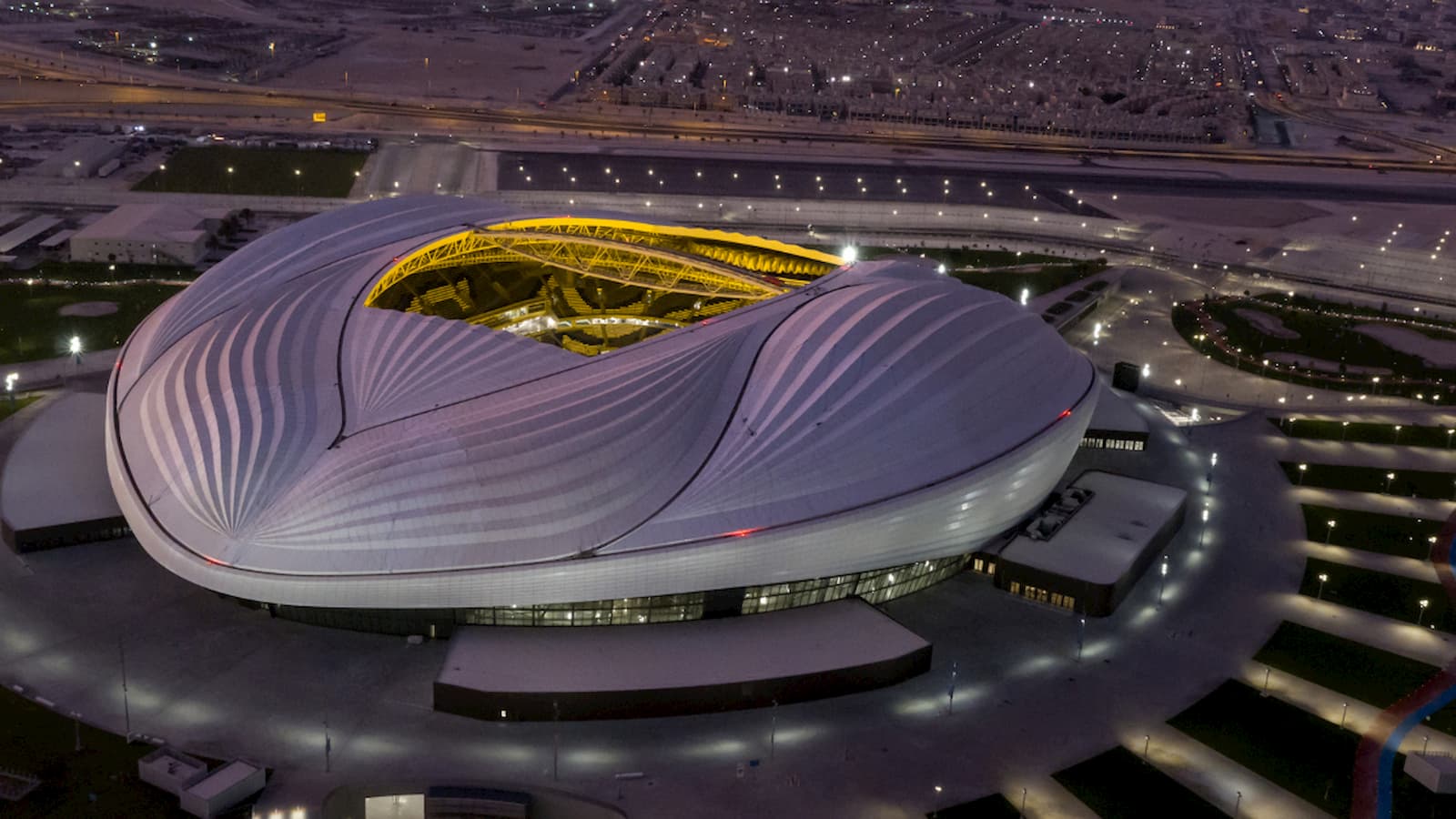 Stadium inaugurated in May 2019

Located in Al Wakrah with a design inspired by the late British-Iraqi architect Dame Zaha Hadid, the futuristic Al Janoub Stadium will host seven matches up to the round of 16 stage during Qatar 2022. The design is inspired by the sails of traditional dhow boats – in tribute to Al Wakrah's seafaring past. An innovative cooling system and retractable roof mean the stadium can be used all year round.

The stadium was inaugurated on May 16, 2019, ahead of that year’s Amir Cup final. 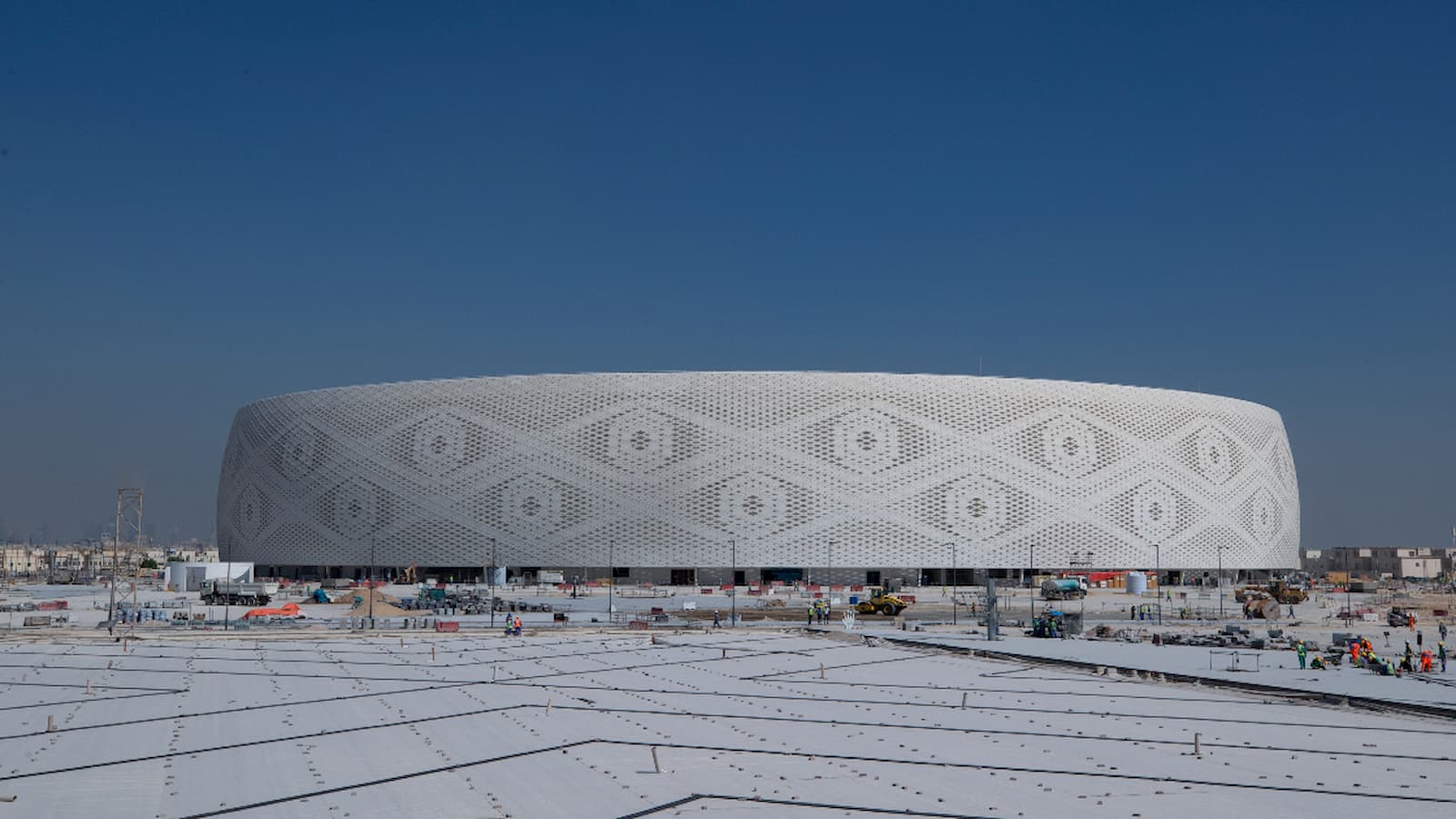 The design of Al Thumama Stadium is inspired by the 'gahfiya', a traditional woven cap worn for centuries by men across the Arab world. It is the first FIFA World Cup venue to be designed by a Qatari architect – Ibrahim M. Jaidah. The stadium will host eight matches up to the quarter-finals stage during Qatar 2022.

Construction update: Roof and façade works have been completed, along with the stadium’s bleacher installation. Seat installation, along with mechanical, electrical and plumbing works, plus finishing, are ongoing.

Education City Stadium is located at the heart of Qatar Foundation – a vibrant center for knowledge and innovation where this ultramodern arena is a fitting addition and lasting symbol of sustainability. The stadium will host eight matches up to the quarter-finals stage during Qatar 2022.

The stadium became the first Qatar 2022 tournament venue to receive a five-star GSAS sustainability rating ahead of its virtual inauguration in June 2020. More recently, Education City hosted matches in the West Zone of the 2020 AFC Champions League and was also a venue for the East Zone portion of the competition. The stadium will host matches during the upcoming FIFA Club World Cup 2020, including the final.

Stadium inaugurated in May 2017

On May 19, 2017, Khalifa International Stadium became the first Qatar 2022 stadium to open when it hosted the Amir Cup final in front of more than 40,000 fans. Located in Aspire Zone, the historic venue has previously hosted the Asian Games and the AFC Asian Cup. The stadium is set to host eight matches up to the third-place play-off during Qatar 2022.

Recent events to have taken place at Khalifa International include the 2019 IAAF World Athletics Championships, the 24th Arabian Gulf Cup and the FIFA Club World Cup Qatar 2019. In 2020, the stadium hosted matches in the West Zone of the 2020 AFC Champions League and was also a venue for the East Zone portion of the competition. Along with Education City and Ahmad Bin Ali, the stadium will host matches during the FIFA Club World Cup in February. 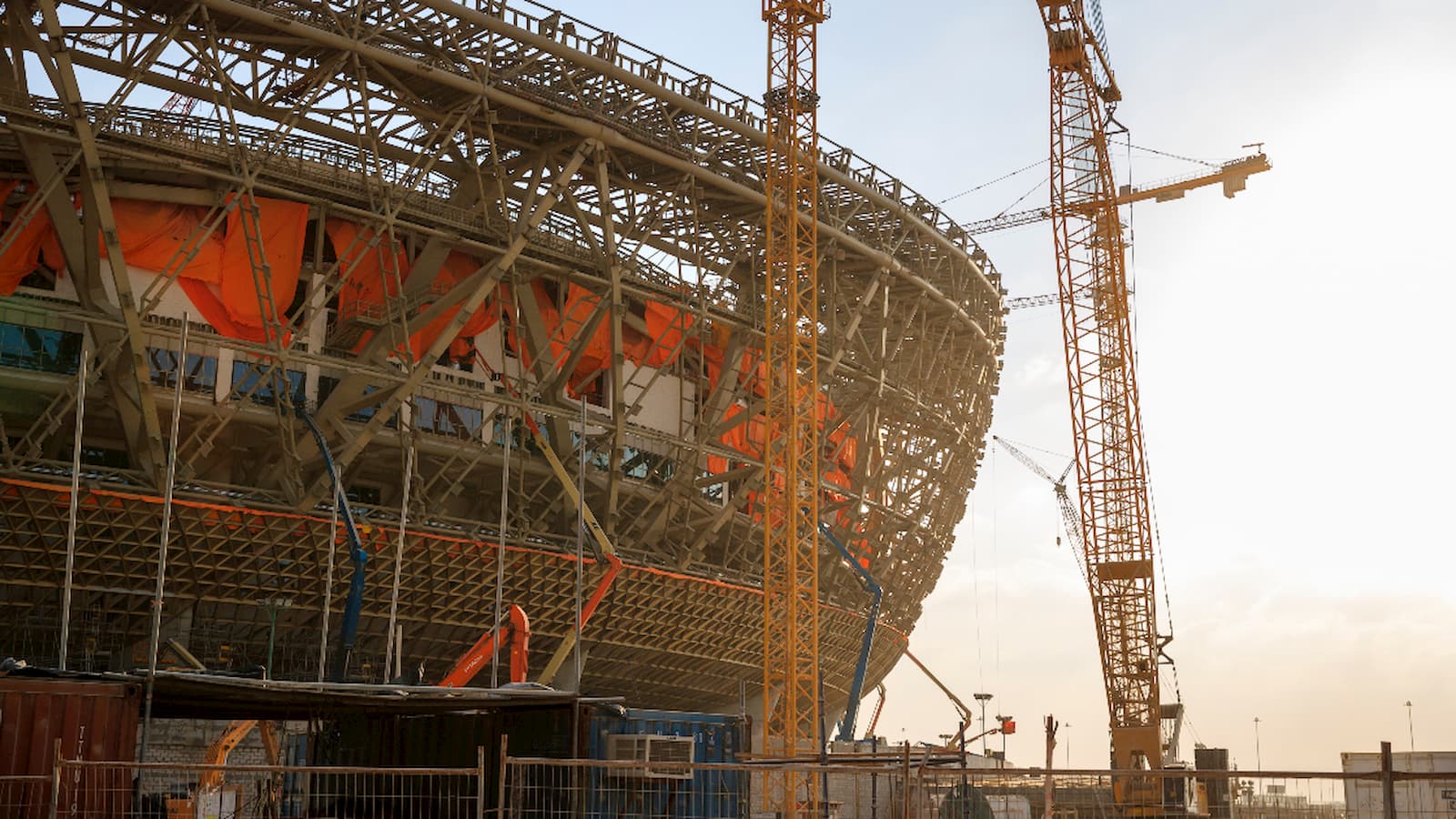 The 80,000-seat Lusail Stadium will embody Qatar's ambition, along with its passion for sharing Arab culture with the world. The design of this magnificent stadium is inspired by the interplay of light and shadow that characterizes the fanar lantern. The venue will also become the centerpiece of Lusail – a newly built, state-of-the-art metropolis, designed specifically with residents’ needs in mind. The stadium will host ten matches up to and including the final of Qatar 2022.

Construction update: The stadium’s concrete works, bowl steel installation and the first phase of the roof big lift have been completed with preparation for the final phase ongoing. The skybox and hospitality lounge pitch-facing glazing has been completed. Meanwhile, the installation of the stadium’s steel structure and façade are ongoing, as are the mechanical, engineering, plumbing and finishing works. 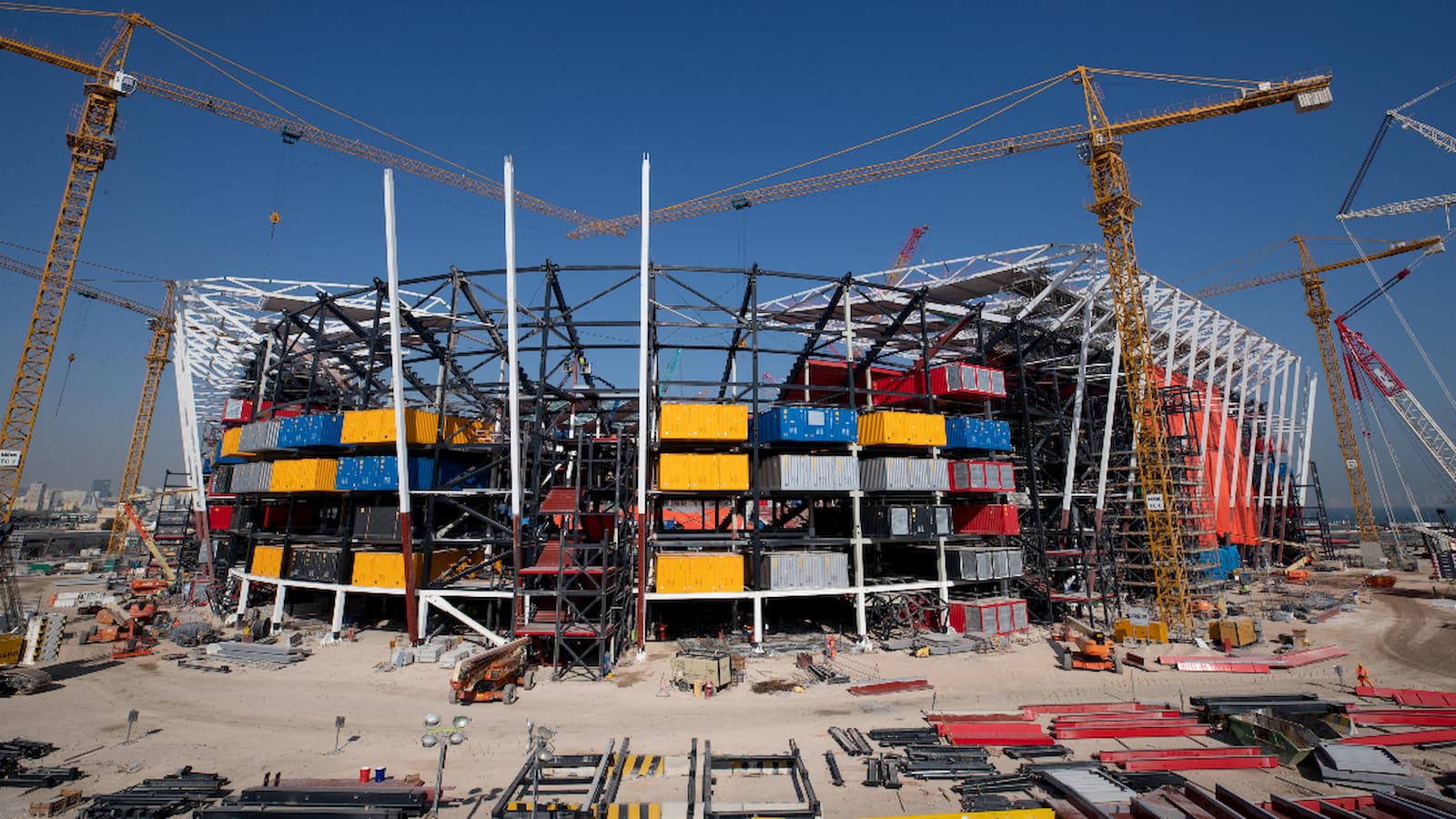 Ras Abu Aboud Stadium will be the first fully demountable and re-usable tournament venue in FIFA World Cup history. Designed by Fenwick Iribarren Architects, this 40,000-capacity stadium will be built using shipping containers and other modular materials. Overlooking the stunning Doha Corniche and West Bay skyline, the stadium will host seven matches up to the round of 16 stage during Qatar 2022. 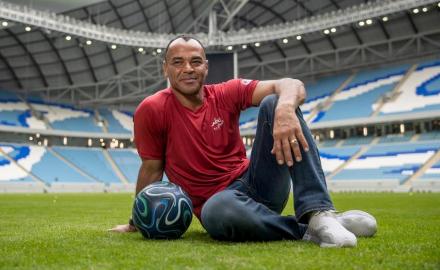 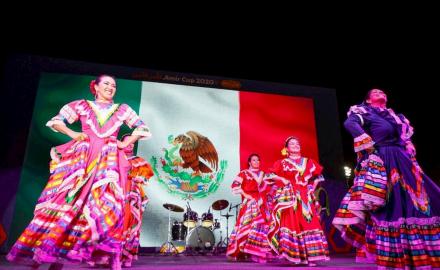 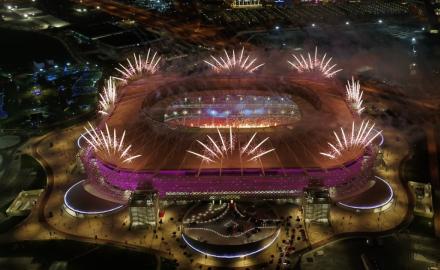