Nine years ago, in a historic win, Qatar was awarded the 2022 FIFA World Cup.

With immense self-belief and an unwavering commitment, the nation took on the challenge to deliver amazing in the lead up to the world's biggest football tournament, to be hosted for the first time in an Arab nation.

Today, in Qatar's road to 2022, the nation achieved a huge milestone with the unveiling of the tournament's official emblem.

To make this momentous occasion even more memorable, the Supreme Committee for Delivery and Legacy (SC) rolled out an international digital campaign this evening at 20.22 (8.22 pm/AST).

The official logo of the FIFA World Cup Qatar 2022 was projected on to iconic landmarks and buildings across Qatar including Katara, Souq Waqif, Torch Doha, Sheraton, and Al Zubarah Fort.

Here are some photos from the official unveiling at some of these sites in Qatar:

In addition to these spots in Qatar, the official logo of the FIFA World Cup Qatar 2022 was also simultaneously displayed in 22 other countries around the world!

According to SC, the FIFA World Cup Qatar 2022 emblem mirrors the richness of Arab culture while representing the vision behind the first tournament in the Middle East and the Arab world.

SC has further explained the different elements that make up the official logo:

These dots on the top left side of the emblem represent the marks that are placed above and below Arabic letters.

The football on the left side of the emblem is presented in a geometric style, representing Arabic culture.

This is the most renowned silhouette in the world of football

The multifaceted symbol represents the 8 stadiums where the tournament will be played and also signifies the human connections that will endure long past it.

The flow of the shawl

The top of the logo shows the delicate movement of a shawl, which is worn around the world and in the Arab and Gulf region in particular.

Holding an element of wonder, the emblem can rotate to reveal a perfect circle, reflecting both our planet and a football.

The emblem contains floral patterns similar to those embroidered on Qatari shawls and form an integral part of the country's heritage. These decorations also reflect the richness of Middle Eastern culture.

A typeface with a human touch

The typeface is inspired by the elegance of hand-written Arabic calligraphy. This is witnessed in the logo in the extended line letters called kasheeda and the unique letter 'Q'.

Did you happen to be at any of the places where the logo was revealed? Share your thoughts and experiences with us in the comments below!

By QLNews·1·2 weeks 10 hours ago
The Ministry of Public Health has highlighted steps that can be followed to download the certificate of immunity via the MyHealth online portal. 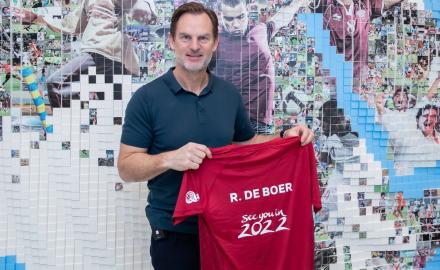