The holiday of Valentine's Day probably came from the ancient Roman feast called "Lupercalia." In the early days of Rome, dangerous wolves lived in the forest nearby. The Romans called upon one of their gods, Lupercus, to keep the wolves away. A festival held in honor of Lupercus was celebrated February 15th. The festival was celebrated as a spring festival. Their calender was different at that time, with February falling in early springtime.

One of the customs of Lupercalia for young people was called "name-drawing." On the eve of the festival of Lupercalia, the names of Roman girls were written on slips of paper and put in a jar. Each young man drew a piece of paper with a name on it. The girl whose name was chosen would be his sweetheart for the year.

Legend says that the holiday became Valentine's Day after a priest named Valentine.
Valentine was a priest in Rome 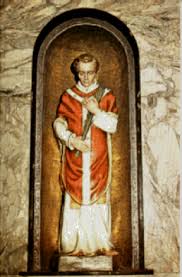 at the time when Christianity was a new religion.
The Emperor at that time was Claudius II. He ordered the Roman soldiers NOT to marry or become engaged. Claudius believed that as married men, his soldiers would want to stay home with their families rather than fight his wars.
Valentine disobeyed the Emperor's order and secretly married the young couples. He was eventually arrested, imprisoned, and executed.

Valentine was beheaded on February 14th, the eve of the Roman holiday Lupercalia. After his death, Valentine was named a saint. As Rome became more Christian, the priests moved the spring holiday from the 15th of February to the 14th - Valentine's Day. Now the holiday honored Saint Valentine instead of Lupercus. Valentine's Day started in the time of the Roman Empire. In ancient Rome, February 14th was a holiday to honour Juno. Juno was the Queen of the Roman Gods and Goddesses. The Romans also knew her as the Goddess of women and marriage. The following day, February 15th, began the Feast of Lupercalia.

The lives of young boys and girls were strictly separate. However, one of the customs of the young people was name drawing. On the eve of the festival of Lupercalia the names of Roman girls were written on slips of paper and placed into jars. Each young man would draw a girl's name from the jar and would then be partners for the duration of the festival with the girl whom he chose. Sometimes the pairing of the children lasted an entire year, and often, they would fall in love and would later marry.

Under the rule of Emperor Claudius II Rome was involved in many bloody and unpopular campaigns. Claudius the Cruel was having a difficult time getting soldiers to join his military leagues. He believed that the reason was that roman men did not want to leave their loves or families. As a result, Claudius cancelled all marriages and engagements in Rome. The good Saint Valentine was a priest at Rome in the days of Claudius II. He and Saint Marius aided the Christian martyrs and secretly married couples, and for this kind deed Saint Valentine was apprehended and dragged before the Prefect of Rome, who condemned him to be beaten to death with clubs and to have his head cut off. He suffered martyrdom on the 14th day of February, about the year 270. At that time it was the custom in Rome, a very ancient custom, indeed, to celebrate in the month of February the Lupercalia, feasts in honour of a heathen god. On these occasions, amidst a variety of pagan ceremonies, the names of young women were placed in a box, from which they were drawn by the men as chance directed.

The pastors of the early Christian Church in Rome endeavoured to do away with the pagan element in these feasts by substituting the names of saints for those of maidens. And as the Lupercalia began about the middle of February, the pastors appear to have chosen Saint Valentine's Day for the celebration of this new feaSt. So it seems that the custom of young men choosing maidens for valentines, or saints as patrons for the coming year, arose in this way.

amused me of your stories... what about mothers day and fathers day?

I think in South they call it velan, may be Pajju can verify

my vocab is so bad, I cant remember if its belan or velan

is as follows: I am sure that my friend Pajju will back me up on this..

Valentine's Day originated hundreds of years ago, in India !!

It is a well known fact that Indian men, sometimes mistreat and disrespect their wives. One fine day, it happened to be the 14th day of February, one brave Indian woman having had enough "torture" by her

husband, finally chose to rebel by beating him up with a Velan (rolling pin).

Yes....the same Velan which she used daily, to make chapattis for im....only this time, instead of the dough, it was the husband who was flattened.

This was a momentous occasion for all Indian women and a revolt soon spread, like wild fire, with thousands of housewives beating up their husbands with the Velan.

There was an outburst of moaning "chapatti-ed" husbands all over India .

The Indian men-folk quickly learnt their lesson and started to behave more respectfully to their Indian women.

Thereafter, on 14th February, every year, the womenfolk of India would beat up their husbands, to commemorate that eventful day. The wives having the satisfaction of beating up their husbands with the Velan and

the men having the supreme joy of submitting to the will of the women they loved. Soon the Indian men realised that in order to avoid this ordeal they need to present gifts to their wives....they brought flowers

and gifts and chocolates. Hence the tradition began.

As India fell under the influence of Western culture, that day was called 'Velan time' day.

The ritual soon spread to Britain and many other Western countries, specifically, the catch words 'Velan time!'. Of course in their foreign tongues, it was first anglicised to 'Velantime' and then to 'Valentine'.

And thereafter, 14th of February, came to be known as Valentine's Day!

By Qatar Living·1·4 weeks 6 hours ago
The Ministry of Public Health has updated the country lists on the 28th of December based on Covid-19 risks and the Travel and Return Policy. The updates will come into effect at 7 pm on January 1, 2022.