After four days of exciting action on the Khalifa International Tennis & Squash Complex courts in Doha at the men's qualifiers of the 2021 Australian Open, the 16 entrants from the stage for the main event in Melbourne emerged on Wednesday.

A total of 128 players, including the 2019 Australian Open boys' singles champion Lorenzo Musetti, participated in the event held outside of Australia for the first time in the tournament 116-year history.

In the end, Spain's Carlos Alcaraz, a 17-year-old ranked No.141 who won three ATP Challenger titles in 2020 and was voted the ATP Tour's Newcomer of the Year; Elias Ymer of Sweden, Ukraine's Sergiy Stakhovsky and Belgium's Kimmer Coppejans were among those who made the Melbourne cut.

Others on the list are The 174-ranked Michael Mmoh of the USA, Czech Republic's Tomas Machac, Spain's Mario Vilella Martinez, world No.12 Viktor Troicki of Serbia, Roman Safiullin of Russia, and Switzerland's Henri Laaksonen.

Craig Tiley, Tennis Australia CEO and Australian Open Tournament Director, said, "There's no question the Qatar Tennis Federation are world champions on how they've managed this event for us. Very quickly we had to turn around and put an event on with more than 120 players plus their entourage, that's a massive draw size, and there hasn't been a draw size that big in Doha before, so that's significant they were able to do it so well at short notice."

He added, "We are very fortunate Qatar are handling the pandemic so well, and the testing is vigilant and ongoing to ensure everyone is kept safe. The Qatar Tennis Federation has been magnificent in partnering with us, our own Andre Sa; a former top player has done a magnificent job being a tournament director for the first time, alongside Karim and his team on delivering a safe and successful event."

Tiley noted that when the organizers were looking for cities around the world for the Australian Open qualifiers, right away Doha was on top of that list. "So we made the phone call, and the arrangement was made straight away," he said.

Speaking about hosting future events in Doha, Tiley said, "I must admit I felt incredibly proud when the first bit of vision I saw out of Doha was seeing those backboards with the Australian and Qatar on it, with the AO, and the blue courts, and it looked magnificent, and we hope one day we can do something special for Doha and Qatar because of the way they've treated us."

Karim Alami, Qatar Tennis Federation (QTF) Board Member, said, "We are greatly delighted with the success of this tournament. It was a great privilege for us to host the first-ever Australian Open qualifiers to be held outside Australia in the tournament over a century history. We thank the Australian Open organizers and the ATP for the confidence they had in us in offering us this opportunity. I believe all the participants have had a great time in Qatar and we doubtlessly look forward to welcoming them back in the nearest future."

Alcaraz, seeded 21, secured his debut appearance at the first Grand Slam of the year on the back of his straight-sets 6-2, 6-3 upset of No.2-seed and world No. 111 Hugo Dellien of Bolivia. It was a fitting closing for the Spaniard, who has been one of the major revelations of the past year, as he managed to drop just a single set at the tournament - his first-round match against Slovakia's Filip Horansky.

"I am thrilled to win and qualify for the main draw of the Australian Open. I've enjoyed my time in Doha. I like the courts, the hospitality and the atmosphere. My Melbourne's expectation is to relax, play my game, and enjoy every minute of the tournament. I hope to improve on my game and gets even better," Alcaraz said after the match.

World No. 182 Ferreira Silva turned out to be a giant slayer as he ended the hopes of tournament top-seed Gregoire Barrere of France, winning the last match of the tournament 6-3, 6-4 in one hour and 43 minutes on Court A.

World No. 204 Ymer proved too much of a hurdle for fifth-seed Taro Daniel of Japan to cross as the Swedish won in straight-sets 6-1, 6-2. Halys, on the other hand, stopped the progress of Dutch Robin Haase with his 6-3, 6-4 win.

Mario Martinez said, "I am happy to qualify for the main event in Melbourne. I've enjoyed every bit of my stay in Qatar, though we could not move around obviously due to the current situation, I can boldly say that Qatar did an outstanding job at this tournament. I look forward to coming back again." 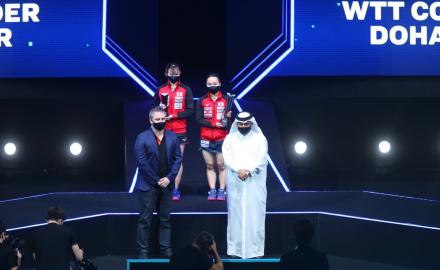 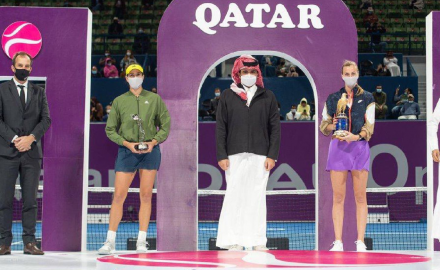