Llavador, Abouelkassem fail to make the cut as most of top-ranked fencers advance on Day 1 of Grand Prix Doha 2021

The preliminary rounds of the men's event of the International Fencing Federation (FIE) Foil Grand Prix Doha 2021 threw up only a few surprises at the Aspire Dome in Doha on Friday, with almost all the world's top-ranked players easily securing their berth into the last-64 of the Tokyo Olympic qualifying event.

Save for world No. 18 Carlos Llavador of Spain, who suffered a third-round 15-13 loss in the hands of the 29th-ranked Wallerand Roger of France; and world No. 19 Alaaeldin Abouelkassem, who lost 13-15 to Russia's Dmitry Zherebchenko, ranked 17th; the first day of the competition was otherwise an easy ride for the rest of the top fencers as they secured their round of 64 berths in style. 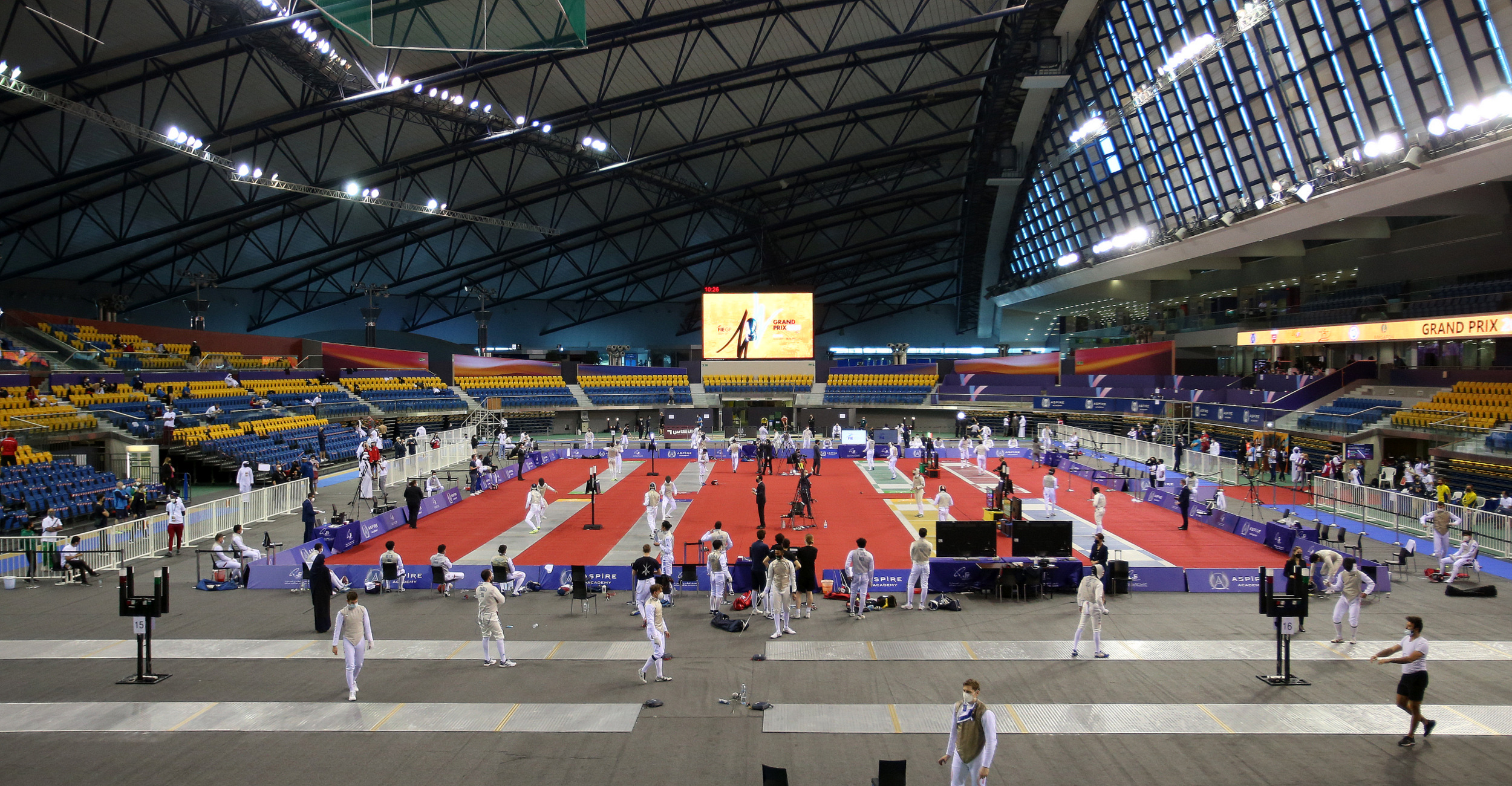 According to the rules, the top 16 qualifiers from the first round of the preliminary, which involved a total of 136 fencers, automatically join the world's top-16, who got preliminary rounds byes into the last-64. In contrast, the rest athletes competed for the remaining 32 slots via the second and third rounds of the preliminary on the day.

Abouelkassem, a silver medalist at the London Olympics and the top-most ranked Arab fencer, had gotten on to a flying start after emerging joint runner-up in his pool, but his efforts in the subsequent round proved too little against the 30-year-old Russian gold medallist in the 2017 World Championships in what was arguably the most entertaining clash of the day. 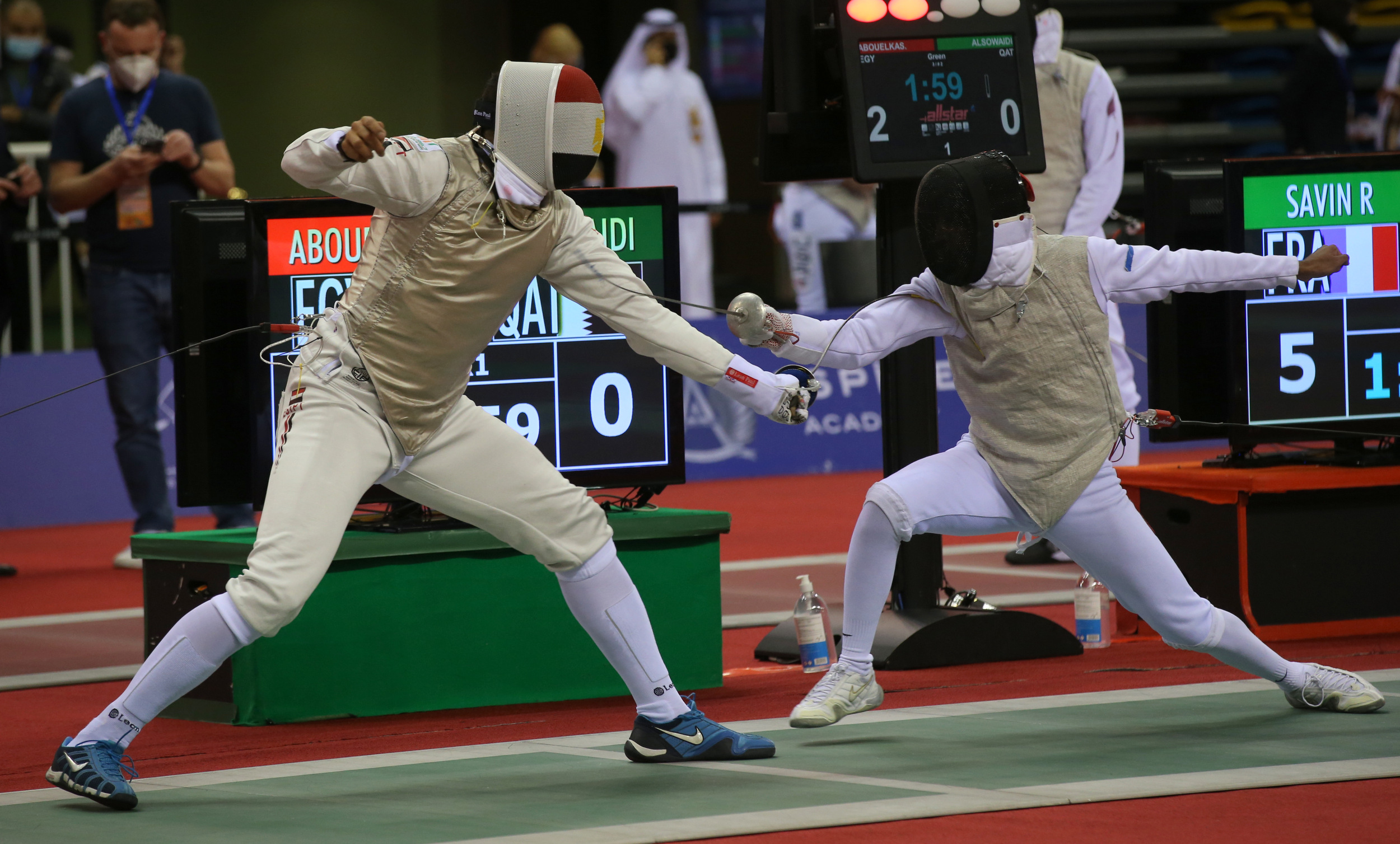 While Abouelkassem lost, it was, however, a different tale for his compatriot Hamza Mohammed, the world No. 30, who ensured that the Arab world's flag remained flying at the tournament after emerging among the top-16 players from the first round.

Up next for the 20-year-old Egyptian is France's Alexandre Ediri, ranked-106, who threw up one of the day's surprises with his 15-8 defeat of the world No. 60 Andrii Pogrebniak in the third round.

Meanwhile, Qatar's Ali Turki Owaida, Abdullah Ismail, Khaled Aref, Hussein Al-Mutawa, and Faisal Al-Suwaidi all failed to make the last-64 cut. Only Owaida made it into the second round, where he was stopped by Austria's Johannes Poscharnig, who claimed a 15-9 victory over the Aspire Academy graduate.

"Although we couldn't qualify for Tokyo through this tournament, I believe we are all winners as we had the opportunity to participate in the tournament. For me, it has special importance as it precedes the Olympic Games in Tokyo and will help me prepare for the Olympic qualifiers next month in Uzbekistan," Owaida said.

He added that competing in the Grand Prix has provided the Qatari athletes with an opportunity to compete at top-levels, which has boosted their confidence in the quest for Tokyo Olympics qualification.

"Participating at this level provides us with great experience, and I hope we can benefit from it during the continental qualifiers for the Olympic Games. I'm a graduate of Aspire Academy, and I've been participating in some major competitions, but the Grand Prix is special considering that it involves the world's top players. So, I count it a privilege to be here," Owaida said.

Meanwhile, Hans Dieter Lammer, FIE's President of the Technical Directorate, has applauded the athletes and the organizers for their impressive performance so far.

"I'm highly impressed with the quality of performance from the athletes at this competition, considering that this is the first top-level competition after about a year of no action due to the coronavirus pandemic. I believe that this is a pointer to what to expect in Tokyo. I also would like to thank Qatar for organizing such a great event," he said.

Lammer added that the standard of the organization has been exceptional.

Speaking in the same vein, Donald Anthony, president and chairman of the board of USA Fencing and vice-president of the FIE Executive Committee, praised Qatar for its world-class infrastructure and its ability to organize such a high-profile competition amid the pandemic.

"Doha has regularly continued to prove itself as a top host of major events, and I think that hosting a tournament the size of the Grand Prix amid the global pandemic is a new success for the Qatari sports officials. I'm delighted with the health and safety protocols for this tournament, and I think the Qatari authorities have done a great job," he said.

The competition continues on Saturday with the preliminary rounds of the women's event.