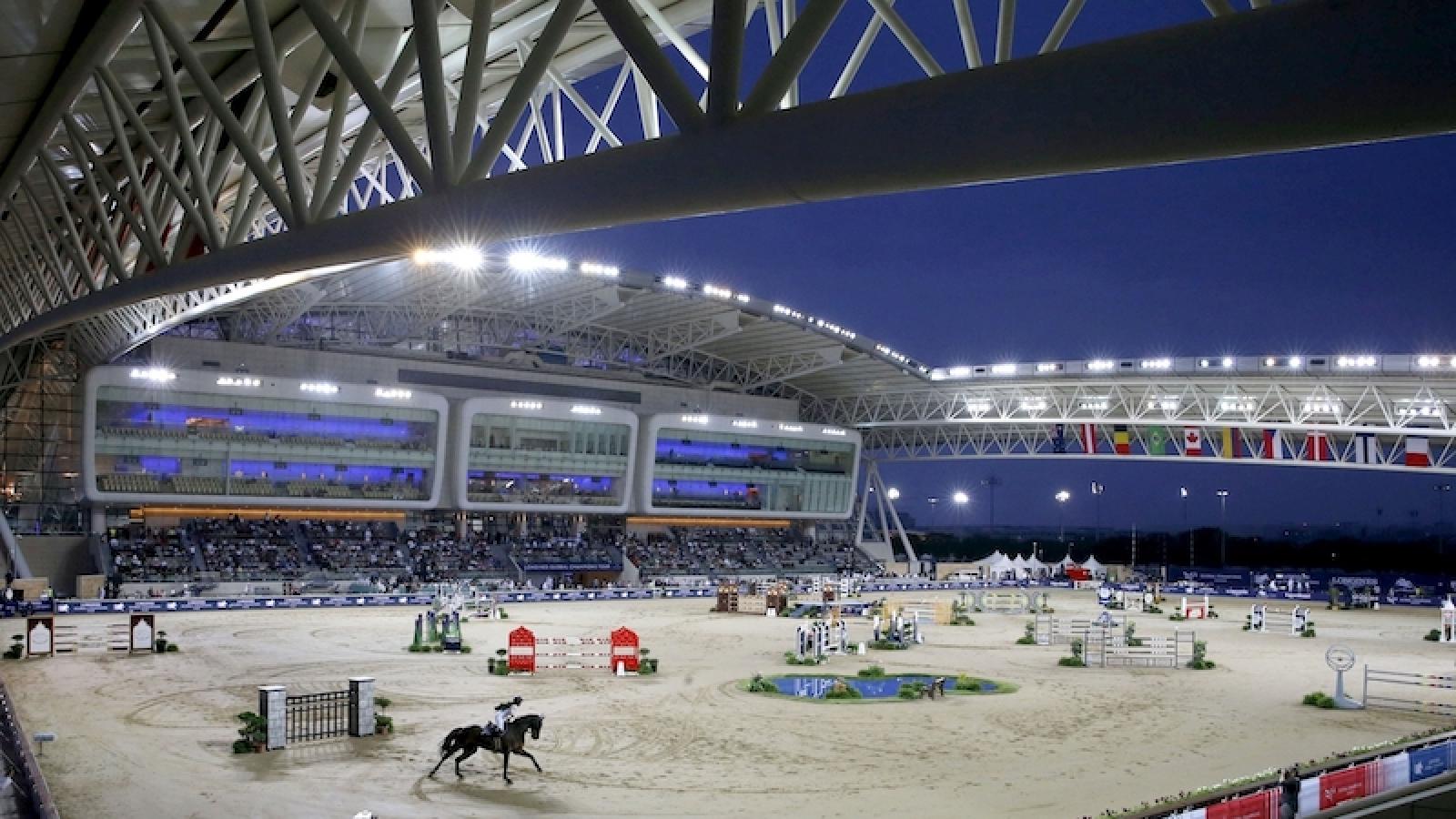 Less than a week after successfully hosting the eighth edition of the Commercial Bank CHI Al Shaqab presented by Longines, the Longines Arena at Al Shaqab will again witness another round of spectacular equestrian action as the Longines Global Champions Tour (LGCT) 2021 kicks off today.

To be held until March 6, the season-opening event brings together the world's best show jumping premier horses and riders at the thrilling first event of the individual and GCL team Championships. The event promises to be an electrifying launchpad as athletes eye up the competition and aim to show their strength in the vast Longines Arena at AL SHAQAB, a Qatar Foundation member.

A total of €25.9 million in prize money are up for grabs across LGCT, and Global Champions League (GCL) and the world's top riders may take part in any of the 15 LGCT events, earning points and competing for a prize pot of over €300,000 in each of the LGCT Grand Prix.

Forty-eight international riders are joining the CSI5* event in Doha, with some of the most dominant names on the circuit present, including Pieter Devos (BEL), Marcus Ehning (GER), Maikel van der Vleuten (NED), Penelope Leprevost (FRA), Peder Fredricson (SWE), Christian Ahlmann (GER), Edwina Tops-Alexander (AUS), Gregory Wathelet (BEL) and Eric Lamaze (CAN). And with a golden ticket for the Longines Global Champions Tour Super Grand Prix at the GC Prague Playoffs in the forefront of everyone's mind, the stars of show jumping will be pulling out all the stops to try and land themselves on top of the podium in Doha. "This is the third year that Al Shaqab is hosting the LGCT season opener, having previously hosted the championship finale, and it is a wonderful and prestigious honor to have the world's leading five-star showjumping competition in Doha again," said Omar Al Mannai, Event Director and Commercial Manager at Al Shaqab.

"Events such as the Longines Global Champions Tour and Commercial Bank CHI AL SHAQAB Presented by Longines, held back to back at Al Shaqab, support Qatar's National Vision 2030 and play a key role in promoting Qatar's development in the area of equestrian sports. It also reflects a commitment from Qatar at a national level to support equestrian sports," Mannai added.

He said that the achievement of hosting LGCT is especially noteworthy during a pandemic such as COVID-19, which has affected sporting events around the entire world.

"Premier global equestrian events such as LGCT and Commercial Bank CHI AL SHAQAB Presented by Longines serve as inspiration for young riders in Qatar, who get the chance to see world-class talent in action. This is why Tour 10 of the Qatar Equestrian Tour – Longines Hathab Supported By The Social & Sports Fund (Daam) took place during CHI AL SHAQAB, and Tour 11 during LGCT," Mannai noted.

Previous LGCT Grand Prix of Doha winners Julien Epaillard (FRA) and Scott Brash (GBR) will be keen to do the double and catapult their way up the overall leaderboard early on in the season. At the same time, Qatari rider Salmen Sultan A M Al Suwaidi (QAT) will be looking for strong results in front of his home crowd. Last year HH Sheikha Mozah bint Nasser and HE Sheikh Joaan bin Hamad bin Khalifa Al Thani joined the Longines Global Champions Tour Grand Prix prize-giving ceremony and witnessed a spectacular sound and light show which was the perfect finish to the evening of world-class show jumping action.

Appreciating and thanking Al Shaqab and Qatar for the efforts, Jan Tops, President and Founder of LGCT and GCL, said, "Riders love to come here (to Qatar) and compete. The Longines Global Champions Tour adds value to this glorious place Al Shaqab as it is a prestigious global event. We are always looking forward to having this event here as it serves as an inspiration to our young riders.

"The three-day event will also see Qatar's Longines Hathab Tour 11, which is magnificently growing with the increase in young riders and horse owners. Al Shaqab is really unique in the world. It's a really horse-friendly place which brings Asia and Europe together. It is also logistics wise the best place to be," Tops, who is also the first team trainer for Qatari riders, added.

Speaking about the challenges of hosting the event given the current global situation, Tops said, "You need the skills and a lot of effort to make it like Al Shaqab, and we have to work accordingly to the regulations. They have the inheritance with the Arabian horse, and they want to be a country of excellence. They want to reach the maximum goal. They want to do the best, and we are looking forward to continuing the relationship, looking to improve and looking to the future for good results."

Sports Director of LGCT, Marco Danese, thanked the hosts for making the opening leg of LGCT possible. "There wasn't the possibility of competing and preparing. We have to thank Al Shaqab for the great organization. Given the pandemic situation, we hope the season can continue with a lot of 5-star shows."

On the competition in Doha, he said, "As we saw at CHI Al Shaqab, the quality of courses, and since the horses are fresh, the level of riders is very, very high. We can be assured of a superb Grand Prix coming Saturday."

The health and safety of everyone at Al Shaqab remain the highest priority, and strict COVID-19 preventive measures will be enforced to ensure the safety and well-being of riders, equestrian fans and all who are involved with the event. In line with the Ministry of Public Health's COVID-19 health and safety guidelines, the venue capacity will be restricted to 10 percent. Tickets can only be purchased at the venue in person on event days.

All the action will be streamed live on GCTV throughout the event.