The second half of the 2020-21 QNB Stars League season kicked off on January 2 and 3 with as many as 17 goals scored in all the six matches played.

Al Sadd provided almost a third of the goals of the Week 12 fixtures after their 5-0 thumping of Al Kharaitiyat on Saturday with Rodrigo Tabata and Baghdad Bounedjah each hitting a brace.

Al Sadd remained at the top of the table after extending their lead to eight points ahead of second-placed Al Duhail who narrowly edged Umm Salal 1-0. With their win, the defending champions Al Duhail are now on 24 points, and they exchanged positions with third-placed Al Gharafa's (23 points) who were held to a 2-2 draw by Qatar SC.

Meanwhile, last season’s runners-up Al Rayyan suffered another setback by losing 0-2 to Al Sailiya. An own goal by Al Rayyan’s Shojae Khalilzadeh and a slick penalty conversion by Tiago Bezerra powered The Peregrines to their fourth win of the season.

Despite the result, Al Rayyan and Al Sailiya stood sixth and eighth with 16 and 15 points respectively.

The Dream Team thus put behind their disappointments in the first leg and began the tournament’s second leg on a strong note by completing a hat-trick of victories. In the process, they improved from ninth to seventh spot with 15 points, while Al Khor remained 11th with seven points.

Al Khor’s miseries compounded as they crashed to their seventh defeat and stood on seven points, very much in the danger zone, as the tournament entered the second leg.

Both teams fought hard with the aim of bettering their position in the league, Al Arabi to move up the ladder and Al Khor to stay away from the danger zone.

In the end, Al Arabi had the last laugh as they put behind their disappointments in the first leg and began the second leg on a confident note by achieving their third successive victory. Heimir Hallgrimsson’s men had beaten Al Kharaitiyat 3-1 in Week 10 and Al Sailiya 1-0 in Week 11.

Mehrdad opened the scoring through an attack that also involved Torabi and Ahmed Fathy.

Torabi doubled the lead by putting the ball past goalkeeper Baba Djibril after receiving a pass from Sebastian Soria.

Al Arabi had more possession (56 percent) in both halves even though Al Khor had their chances.

Abdulrahman Anad made it 3-0 with a rising shot which could have been pouched by Djibril, but the latter fumbled with his collection and the ball drifted into the goal.

Al Khor now have their back to the wall as The Knights have only one point more than bottom-placed Al Kharaitiyat. Al Gharafa fought back to draw 2-2 with Qatar SC at the Qatar SC Stadium on Sunday.

Qatar SC and Al Gharafa are now on 20 and 23 points respectively.

The opening goal came in the 43rd minute, howbeit, via a VAR call - when Fadel on an assist by Alejandro Galvez fired into the lower right of the Al Gharafa goal. The referee used the VAR review to check the potential off-side call before allowing the goal to stay.

Trailing by two goals, Al Gharafa hit back with two quick goals in the second half.

First, Al Janehi jumped high to tap a cross into the net from close range.

Then, Kodjia converted a penalty kick awarded after he was brought down inside the box and the referee awarded the penalty after a VAR review.

A quarter of an hour later, Kodjia nearly scored a winner from close range on a long cross from Hanni. However, Kodjia’s quick-footed drive was pouched by Qatar SC keeper.

The result saw Al Duhail raise their tally to 24 points with their eighth victory and Umm Salal remain on 10 points following their sixth defeat.

Going into the match, Umm Salal had not lost their last four games. However, they could not do much against reigning champions Al Duhail, who are in their usual selves of late after initial struggles.

Al Duhail had stormed into the top four by beating Al Khor (6-1) in Week 10 and The Red Knights then beat Al Ahli 5-3 to finish the first leg of the tournament in third position.

Sabri Lamouchi’s side is well on course to retain the title even though they lag behind leaders Al Sadd on points. 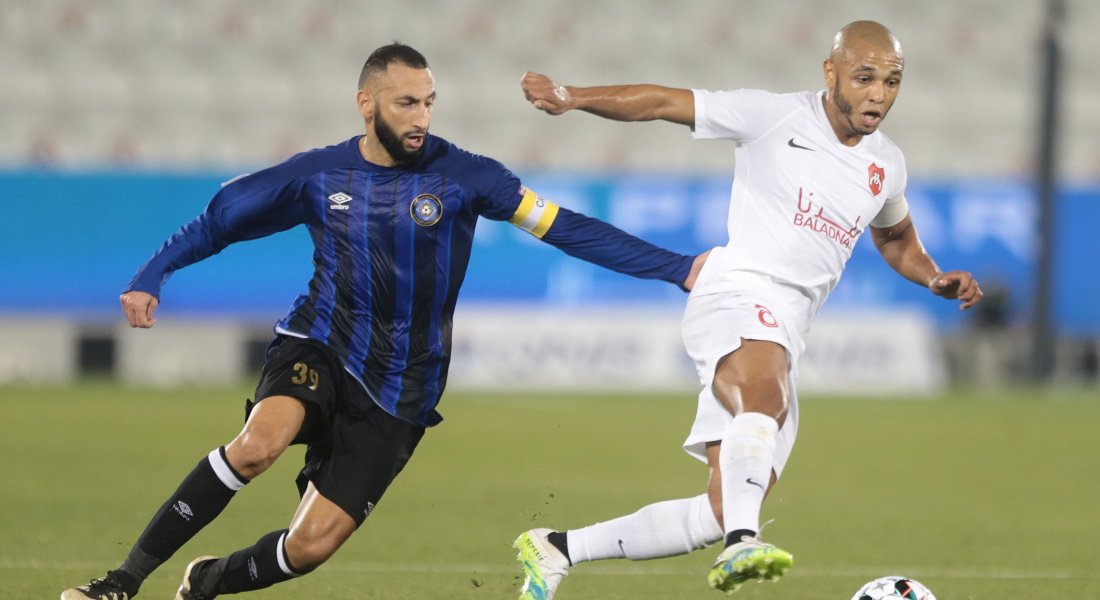 An own goal by Al Rayyan’s Shojae Khalilzadeh in the sixth minute and a slick penalty conversion by Brazilian forward Tiago Bezerra in the 16th minute powered Al Sailiya to their fourth win of the season.

Al Sailiya now have 15 points, while Al Rayyan remained on 16 points following their fourth defeat. It was the second loss in three matches for new Al Rayyan coach Laurent Blanc.

An unexpected error by Khalilzadeh handed Al Sailiya an early surprise lead in the hard-fought match. In an attempt to push the ball away from Tiago, Iranian center-back Khalilzadeh lunged forward to flick the ball away, but ended up shooting into his own net.

Bezerra soon made it 2-0 for Al Sailiya with a penalty kick. Dami Traori brought down Tiago with a push inside his own box. Referee Meshari Al Shammari, after getting the foul reviewed on VAR, pointed to the spot kick. Tiago chose to go left of keeper Fahad Younis for his side’s second goal. Nabil El Zhar (50th-minute penalty) and Hazem Shehata (64th minute) scored the goals for Al Ahli, who moved on to 22 points with their seventh victory.

Al Wakrah stood on 13 points after succumbing to their seventh loss.

Five minutes after the resumption of the second half, Al Ahli took the lead, with Nabil converting a penalty awarded after Lucas Mendes fouled him.

Al Ahli pressed hard and were successful a second time as Hazem found the target with a long shot from deep on the left. The goal was initially ruled offside, but referee Abdulrahman Al Jassim allowed it to stand after referring to the VAR.

Down by two goals, Al Wakrah unleashed a couple of attacks. But Murad again sent his free-kick wide in the 69th minute and substitute Jassim Al Jalabi soon saw his booming shot being off-target.

At the other end, Ali Qaderi missed a chance in the 79th minute. Yet, Al Ahli, despite squandering two chances in stoppage time, cruised to a crucial victory.

Rodrigo Tabata (69th and 79th minutes), Ali Asad (73rd minute) and Baghdad Bounedjah (82nd and 89th minutes) emerged as the goal heroes as Al Sadd completed their 10th win of the season and extended their lead on top of the table with 32 points.

Evans Mensah arrived to meet a perfect cross from Rachid Tiberkanine in the third minute. Under pressure from Musaab Khidir, Mensah managed a wayward header to waste the early opportunity at goal.

In the 10th minute, Khadir launched a curling long cross for Bounedjah. The tall Algerian – in close proximity of the Al Kharaitiyat goalmouth – was beaten to the dipping cross by keeper Shehab Ellethy.

Al Kharaitiyat’s skipper Mohamed Aamir – on the edge of the Al Sadd box – found good angle on his volley, but keeper Meshaal Barsham dived to his left to stop the ball that eventually trickled away.

In the 24th minute, Al Sadd’s Santiago Cazorla almost found the target – with a right-footed drive – but the ball was deflected by the keeper with a dive to his left. Eleven minutes later, after receiving a short tap from Hassan Al Haydous, Nam Tae-Hee hit the Al Kharaitiyat crossbar with a powerful shot.

In another Al Sadd move, Bounedjah clipped one from well inside the box, but the ball sailed close to the crossbar. In another header from close range in the 42nd minute, Bounedjah could not hit the net on a Cazorla corner kick.

In a rather ambitious move, Oumar Sako opted for a long-range shot from outside the Al Kharaitiyat box, but the ball sailed above the crossbar without causing damage in the 48th minute.

After a few hits and misses from both sides, Al Sadd found the net when substitute Tabata, after a cross from Al Haydous, deflected in the ball past the goalkeeper.

The lead doubled when Bounedjah, stationed inside the Al Kharaitiyat box, slipped in a neat cross to unmarked team-mate Ali Asad, who found the net from close range.

Tabata made the most of fresh legs as he scored his second of the match with a slick shot after charging into the Al Kharitiyat box following a short pass from the right flank.

Bounedjah then found the net, drilling a right-footed shot from inside the box as Shehab stepped out to kill the move. Bounedjah scored one more goal, also from close range.

The excitement is sure to continue in the QNB Stars League’s Week 13 matches, to be held on January 7 and 8, 2021, with two games on each day. The fixtures are: