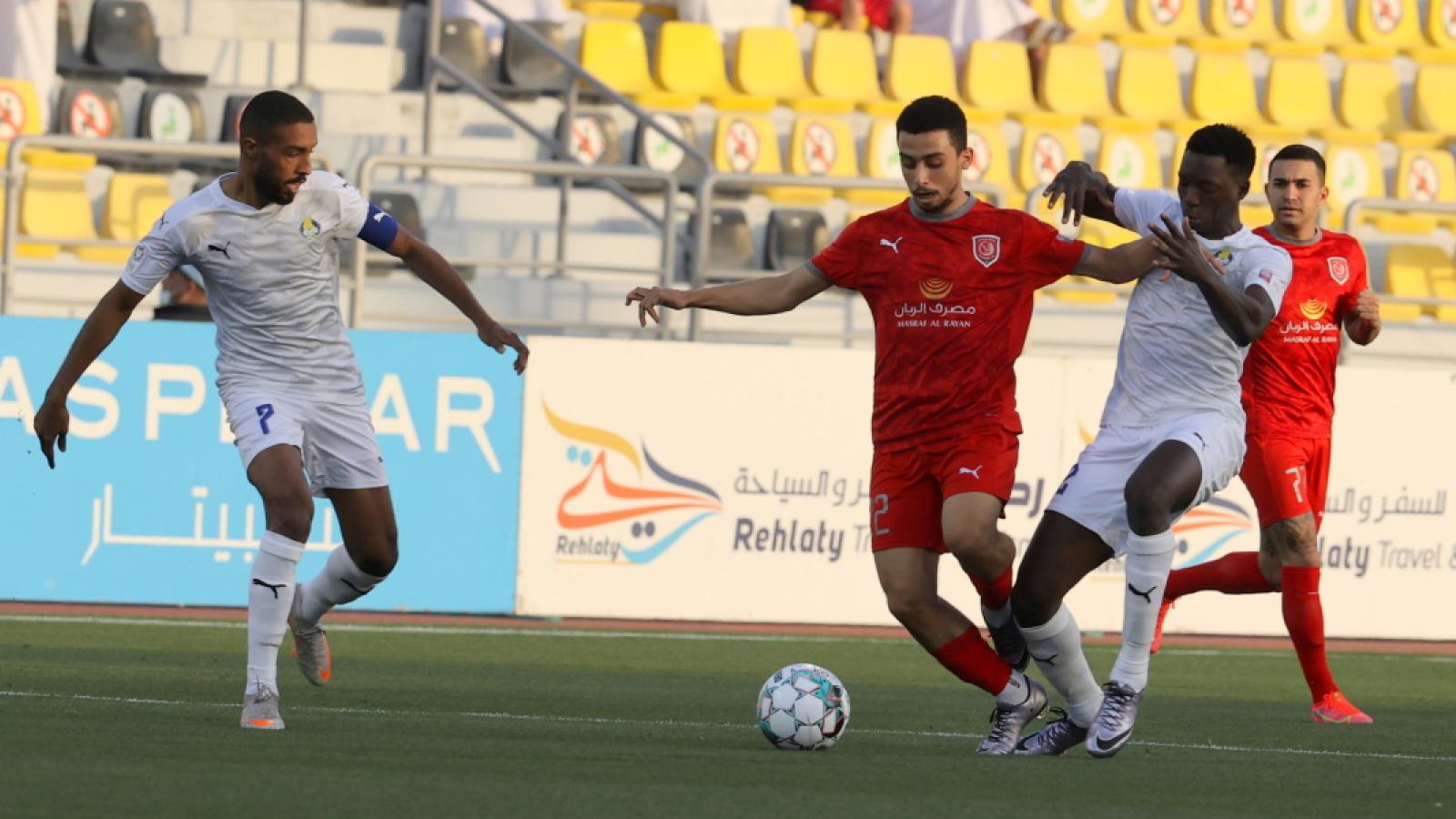 League-leaders Al Sadd extended their points tally to 47 with an unbeaten record, the only team to do so in this season’s league championship, after their 3-2 defeat of Al Arabi in a highly entertaining match. Defending champions Al Duhail, meanwhile, consolidated their second spot with 34 points after their 2-1 victory over Al Gharafa in the 2020-21 season QNB Stars League’s Week 17 fixtures held on Monday and Tuesday (February 22 and 23, 2021).

A total of 14 goals were scored in the six matches played across the fixtures, with the Al Wakrah versus Qatar SC match being the only game that ended in a goalless stalemate.

With the results, Al Sadd are only one win away from clinching the prestigious league title for an unprecedented 15th time in their history. 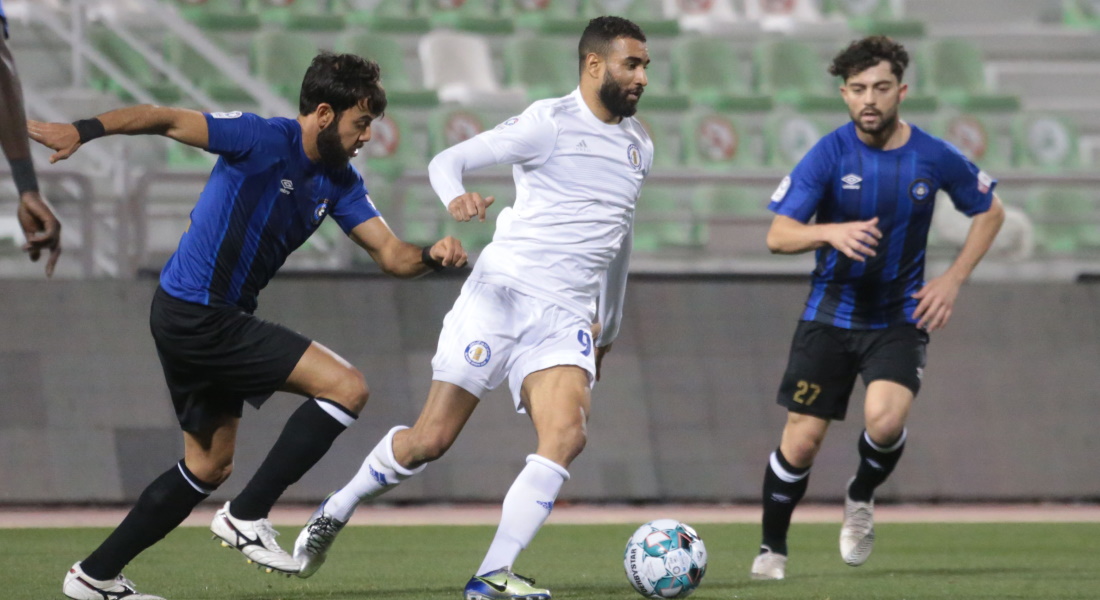 Al Sailiya and Al Khor played out a 1-1 draw at the Al Ahli Stadium on Tuesday.

Ramin Rezaien scored for Al Sailiya in the fourth minute, a lead that was nullified by Rafael Dos Santos in the 77th minute.

Al Sailiya and Al Khor are on 23 and 14 points respectively. It was a valuable point for Al Khor in their bid to stay away from the relegation zone.

Al Khor had slightly more of possession in the first half, but it was Al Sailiya who attacked more. The Peregrines received a big advantage with an early goal and Al Khor struggled to recover from it.

Iranian Ramin, on loan from Al Duhail, took Al Sailiya ahead with an opportunistic strike that beat Al Khor goalkeeper Baba Djibril hands down despite diving to his right.

Al Khor increased their efforts in the second half and their repeated attempts bore fruit as Rafael Dos Santos struck home a free-kick with full force, giving no chance to goalkeeper Amine.

It may be recalled that Al Khor and Al Sailiya had played out a goalless draw in the first leg of 2020-21 season QNB Stars League. 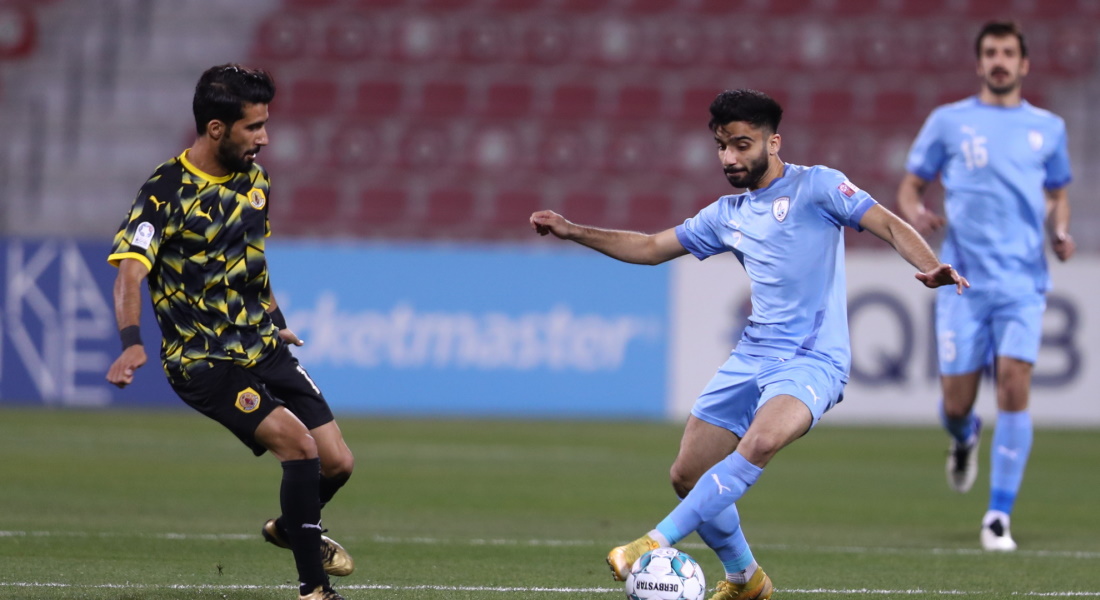 Al Wakrah and Qatar SC shared points in a goalless draw at the Al Arabi Stadium on Tuesday.

Qatar SC now have a tally of 28 points and Al Wakrah 15 points after 17 rounds of action.

In the fifth minute of the entertaining clash, Al Wakrah’s Abdennour Belhocini received a loopy cross from the wing. Belhocini, while trying to deflect the ball into the net from close range, miscalculated his jump and ended up nudging the ball above the crossbar with his knee.

In probably the most spectacular shot of the game up until then, Abdulghani Muneer produced a low fast shot from at least 10 yards away from the Qatar SC box in the 47th minute. His shot was deflected with a dive to his right by the Qatar SC keeper.

In the 61st minute, Al Wakrah’s young player Yasen Abdullah was shown the red card for a reckless tackle on Hamed Ismail.

Al Wakrah escaped conceding a goal from double attempts by Qatar SC. Elmehdi Barrahma’s angular shot from outside the box struck the goalpost and keeper Saoud Al Khater did well to clear the ball after Bashar Resan hit on target a rebound from near the penalty area in the 65th minute. 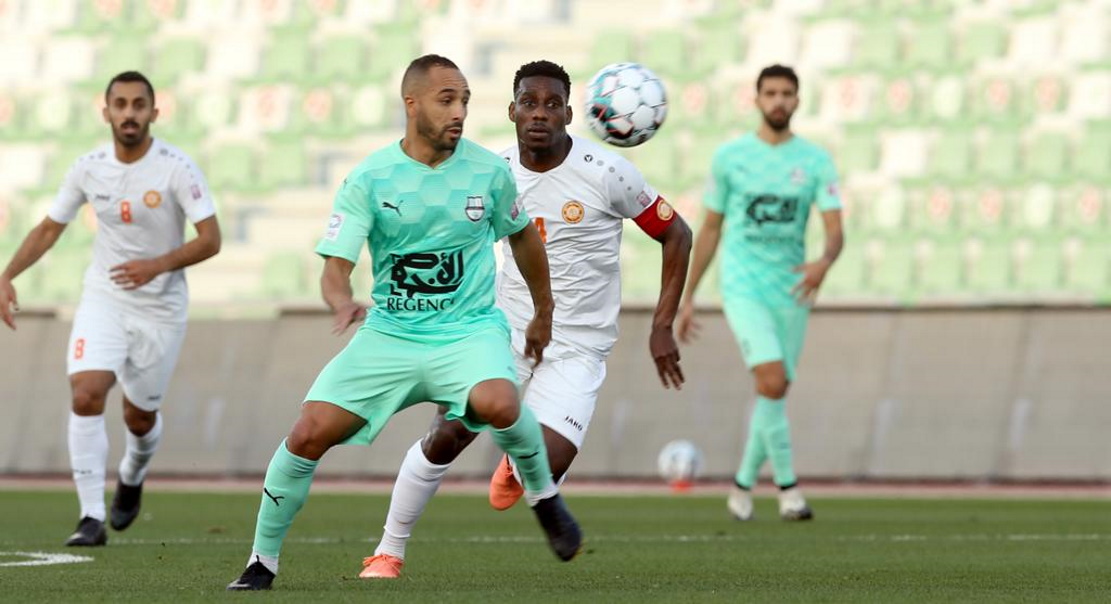 Hazem Shehata’s strike in the 56th minute proved decisive as Al Ahli, playing with 10 men for around 30 minutes following red card to Jassem Al Sharshani, defended well late in the match to seal their eighth victory.

After both sides fought to take early grip on the match without posing any major threat, Al Ahli, through Abdulrasheed Umaru, made the first attempt in the sixth minute. The Under-23 player fired a powerful shot from a distance, but rival goalkeeper Baba Malick dived to his right to stop the ball.

After an exchange of attacks in the second half, Al Ahli broke the deadlock. Shehata, assisted by Umaru, fired a shot on the left corner and the ball was too fast for Malick to stop.

Al Ahli got charged up after taking the lead and pressurized Umm Salal with aggressive football. But they suffered a setback after Al Sharshani received his second yellow card of the match for wasting time while leaving the pitch in a 66th-minute substitution.

In the 87th minute, Al Ahli goalkeeper had to be treated after he punched away a bullet from Ismail Mahmoud. Umm Salal fired on all cylinders for an equalizer, but Al Ahli held their nerve till the end to secure full points. 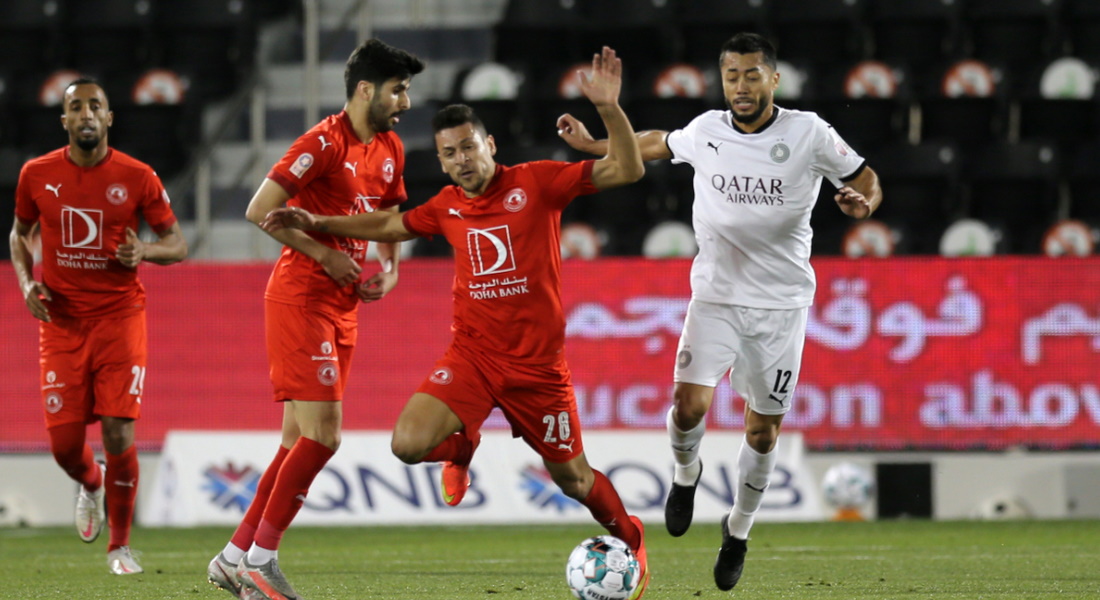 Al Sadd twice fought back from deficit and pulled off an incredible last-gasp victory in the much-awaited Qatar Derby, made famous because of both teams’ passionate fan following, rich tradition and outstanding credentials.

In fact, Al Arabi were cruising to victory till the last minute of regular time before Al Sadd leveled the score. The Wolves then struck the winning goal in stoppage time, much to the dismay of The Dream Team’s players and supporters.

Rodrigo Tabata (63rd minute), Baghdad Bounedjah (90th minute) and Santi Cazorla (90+2) scored for Al Sadd, who raised their points tally to 47 with an unbeaten record, the only team to do so in this season’s league championship.

Sebastian Soria (10th minute) and Yousef Msakni (77th minute) were on target for Al Arabi, who stood on 23 points.

Al Sadd thus extended their domination of Al Arabi this season, having beaten them 4-1 in the first-leg Qatar Derby of 2020-21 QNB Stars League.

Al Sadd had more of the ball in the first half with 61 percent even though Al Arabi took the half-time break with a 1-0 lead.

The fast-paced game saw both teams attack from the word go and Al Arabi shocked Al Sadd with an early goal, with Soria heading in a measured cross from the right by Mehrdad Mohammadi.

In fact, Mehrdad gave the assist for their second goal as well with a thorough pass that was translated into a goal by Msakni with a long-range shot.

Al Arabi were a determined lot, just like they performed against Al Sadd in the 2019-20 season Amir Cup final before going down fighting.

At the other end, Bounedjah thrice and his team-mate Nam Tae-Hee once missed the target.

Action continued to be hot in the second half and Cazorla hit a grounder against the right upright in the 54th minute. Soon, Al Sadd captain Hassan Al Haydous’ shot was blocked by Al Arabi goalkeeper Mahmoud Abunada and Bounedjah hit one wide of the target.

Tabata drew level for Al Sadd by placing the ball home in a goalmouth melee, with Nam doing the spadework along the left goalline.

After Msakni took Al Arabi ahead for a second time, Al Sadd did not lose heart and their concerted efforts bore fruit when Bounedjah headed home Guilherme Torres’ long cross from the right.

Cazorla sealed the issue in favor of Al Sadd by firing in a missile as a thriller came to a close. 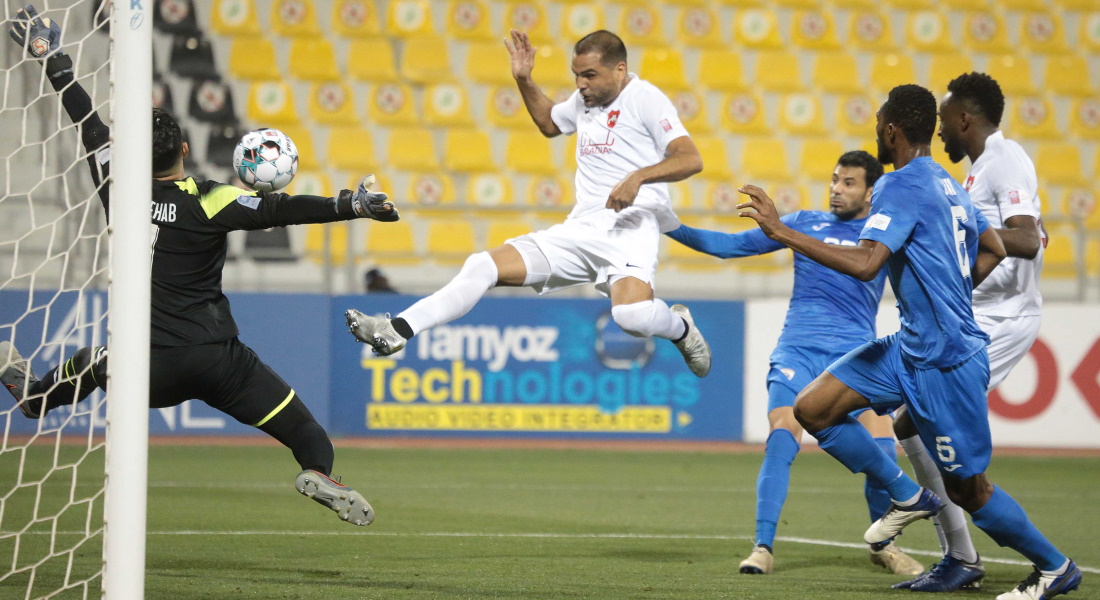 Al Kharaitiyat remained at the bottom of the table with six points.

The match got off to fast start, with Al Kharaitiyat’s Mensah Evans getting to aim at the goal twice inside the first four minutes. On the first occasion, his shot from long range was blocked by an Al Rayyan defender and the second shot, from inside the box, sailed above the crossbar.

Barely a couple of minutes later, off an indirect corner kick, Al Kharaitiyat’s Nasser Al Nasr also got the chance to shoot towards the goal, but his shot was blocked by Yohan Boli with his back.

In the eighth minute, Al Rayyan’s Ibrahim Masoud created a bit of space away from his marker on the edge of the Al Kharaitiyat box. Masoud’s left-footed drive that stayed low was quickly saved with a dive by keeper Shehab Ellethy.

In the 50th minute, Al Rayyan went 2-0 up. Ibrahim Masoud found Naif with a neat cross and the latter arrived inside the box with perfect timing and wasted little time in tapping the ball to the right of the goalkeeper.

Captain Brahimi rounded off the tally with a quick tap into the goal from close range in the 85th minute. 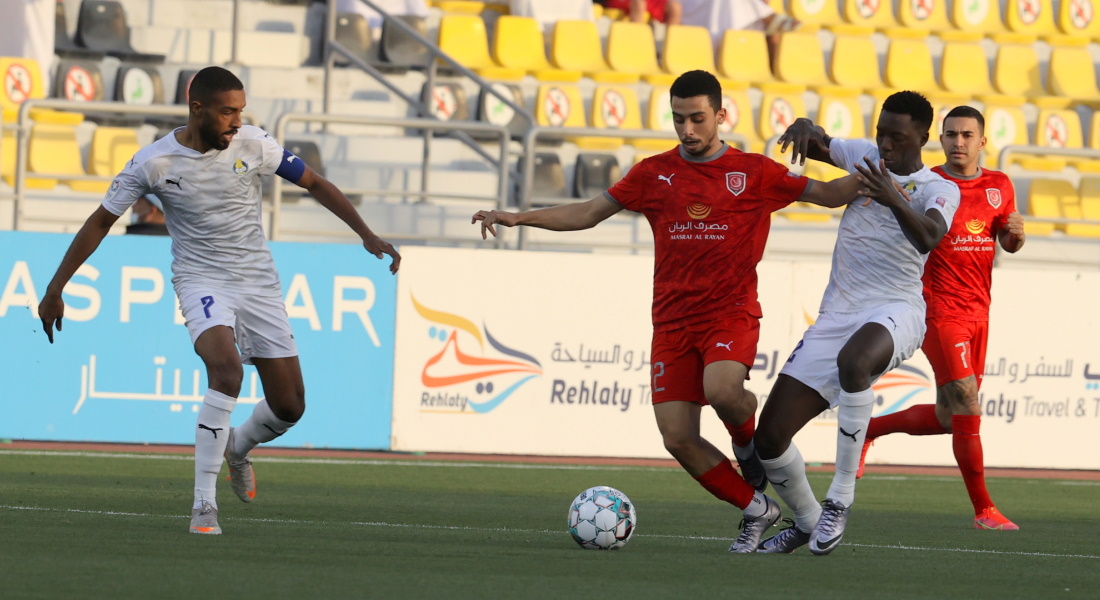 The Red Knights consolidated their second spot with 34 points, while Al Gharafa stayed on 27 points.

As Al Duhail got off to a fast start, Michael Olunga was on target early when he headed the ball past Al Gharafa goalkeeper Yousef Hassan in a third-minute corner kick. But referee Abdulhadi Al Ruaile, after consulting the VAR, disallowed the Kenyan striker’s goal due to offside.

Olunga got another opportunity to score after a fine ball from Assim Madibo, but he hit the ball wide from a difficult angle as the clock reached the double figures.

Al Gharafa too created chances that included their 17th minute attack when Kodjia stormed near the danger area, but Al Duhail defenders were well in time to thwart him.

Just a few moments later, Al Duhail went ahead when Muntari, unmarked near the penalty area, fired a left-footed shot into the net following a corner kick by Dudu.

However, Al Gharafa did not have to wait much to find an equalizer as they won a penalty after Al Brake committed a foul against Homam Al Ameen near the goal post. Kodjia hit a confident low shot from the spot, firing the ball past a diving goalkeeper Salah Zakaria.

Five minutes before half-time, the referee reversed his decision of awarding another penalty to Kodjia following Al Brake’s challenge against him – after checking with VAR.

In the penultimate minute of the first half, Brazilian Dudu put Al Duhail in the lead again with a header from close range after a fine cross following an attack from the left flank.

Al Gharafa, aiming to bounce back, made a fiery attack in stoppage time, but the rival goalkeeper made a flying save from Adlene Guedioura’s bullet from near the penalty area to keep the Sabri Lamouchi-coached side in lead at half-time.

The second session started in similar fashion, with both sides creating opportunities to score.

Kodjia and Dudu both came close to scoring their second goal during the exchanges, but none of the teams succeeded in finding a goal in the second half as Al Duhail emerged as victorious.