Al Gharafa launched the 2021-2022 QNB Stars League season with a commanding 2-0 win over Al Shamal in Week 1 at the Al Gharafa Stadium on Saturday, while defending champions Al Sadd also had a perfect start to the new season with a 2-0 defeat of Al Sailiya.

In all, a total of 14 goals were scored in the six fixtures played over the weekend, with Al Duhail's 4-1 rout of Al Khor being the highest-scoring match of Week 1. 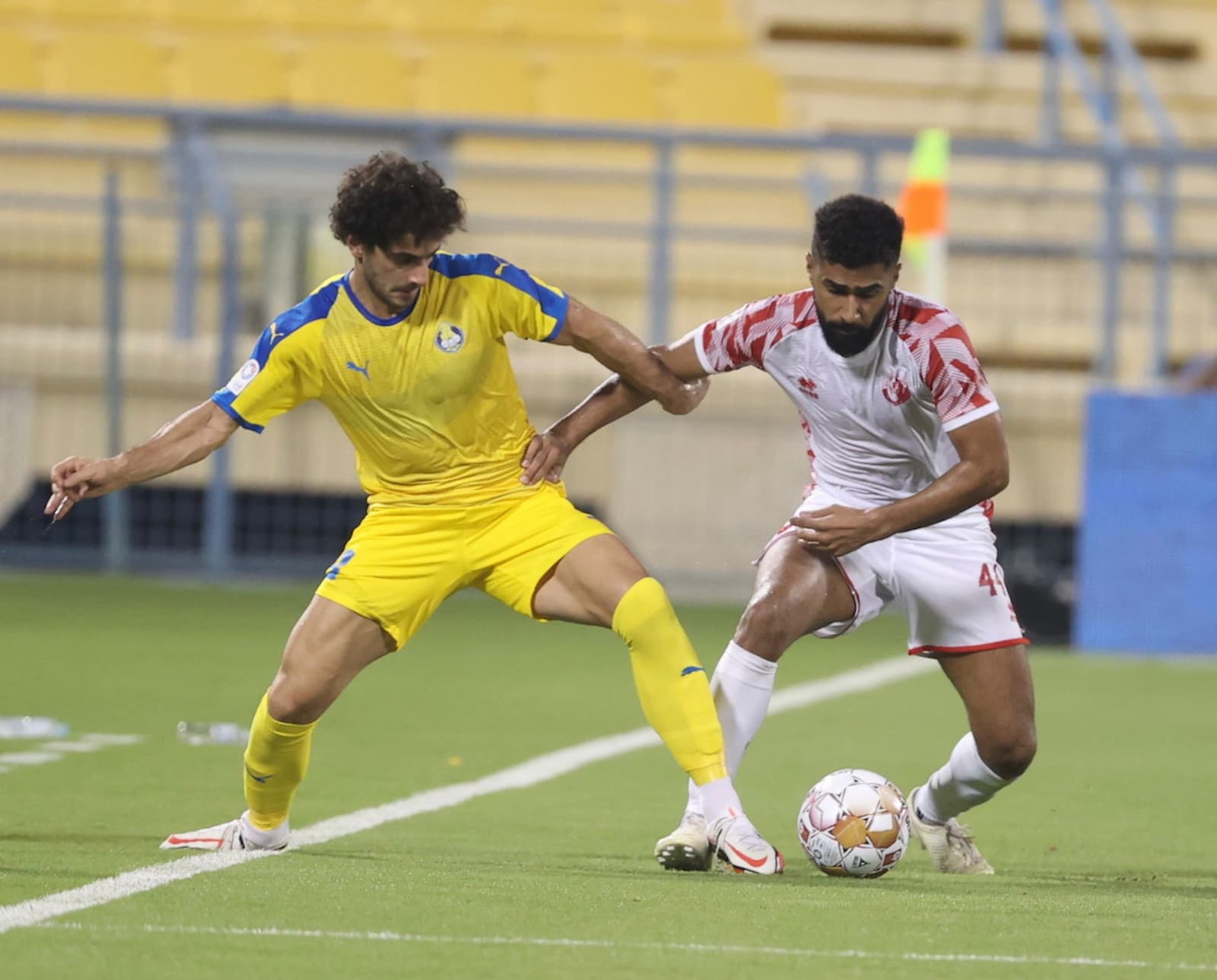 Al Gharafa launched the 2021-2022 QNB Stars League season with a commanding 2-0 win over Al Shamal in Week 1 at the Al Gharafa Stadium on Saturday.

Ahmed Al Janehi (20th minute) opened the scoring for Al Gharafa. Maintaining good ball possession, The Cheetahs doubled the lead when Moyad Hassan found the net in the 33rd minute. The match got off to a fast pace with Al Gharafa dictating the proceedings. Skipper Hassan early on missed an easy chance to score from close range, but his shot flew above the Al Shamal crossbar in the ninth minute.

A minute later, Algerian attacking midfielder Sofiane Hanni curled in a spectacular shot from the edge of the box, but Al Shamal keeper Hassan Idriss was alert to stop the ball. In what could have been a spectacular goal, Al Shamal skipper Baha Faisal – from the edge of the Al Gharafa box – unleashed a powerful shot that hit the goalpost and sailed away in the 17th minute.

Al Gharafa soon afterward scored. Hanni, after receiving a long cross, found Al Janehi with a low flick. Al Janehi was quick to shoot the ball into the net from close range. In the 32nd minute, Al Gharafa doubled the lead when Hassan slipped in a low shot that beat a defender and keeper Idriss.

Qatar SC and Al Ahli played out a 0-0 draw at the Al Wakrah Stadium on Saturday.

Both teams had their share of chances in the first half, but it ended goalless. As Al Ahli made a cautious start, Qatar SC initiated the attacks, with Youcef Belaili and Sebastian Soria, who is back among The Kings’ fold after a very long period of time, leading their charge.

Soria set up Belaili after 15 minutes, but the latter sent out a weak shot. Belaili had a goal disallowed for offside towards the end of first half.

At the other end, Al Ahli captain Ali Qaderi sent his shot wide in first-half injury time after The Brigadiers’ new recruit Marko Jevtovic’s bicycle kick was off-target. Qatar SC’s Spanish star Javi Martinez made some forays into the rival goal, but in vain.

Al Ahli were more on the offensive in the second half and Qaderi hit the side-netting in the 51st minute.

Umm Salal and Al Rayyan shared points after a 2-2 draw at the Al Gharafa Stadium on Saturday.

Umm Salal gained an upper hand when they opened the scoring following a mistake by Shojae Khalilzadeh. In an attempt to clear the ball near the edge of his own box, Khalilzadeh lost control of the ball which was quickly picked up by Bakhit. Bakhit tapped the ball between the legs of Khalilzadeh and then charged towards the goal. Al Rayyan keeper Fahad Younes stepped out of his position, but Bakhit calmly slotted the ball into the net with a right-footed drive to stun the Al Rayyan camp.

Four minutes into the second half, Franck Kom was shown the red card for second booking when he brought down Moses Orkuma with a tackle. In the 55th minute, Isael drilled one into the net with a left-footed drive to give his side a 2-0 cushion.

However, Boli reduced the deficit with a curling direct free-kick.

Ten minutes later, the Ivorian striker picked up a loose ball and smashed a powerful shot past goalkeeper Khalifa Ababacar for the equalizer, much to the delight of Al Rayyan.

Gabonese striker Aaron Boupendza scored the only goal of the match in the 71st minute.

For the most part of the first half, long-range shots were employed by both teams as defenders from the two sides refused to allow space to strikers on either side. In the 14th minute, Al Arabi’s Mehrdad Mohammadi fired a bullet that got deflected off Lucas Mendes. The referee required VAR assistance to decide against calls for a penalty from Al Arabi players.

Three minutes from the first-half whistle, Al Arabi found the net, but a solo run and finish by Boupendza was ruled offside. Four minutes into the second half, the hit-and-miss continued as Al Wakrah’s young Khalid Muneer had time and space to drill a short cross into the net, but his left-footed drive flew above the crossbar.

In the 71st minute, Boupendza found the net with a left-footed drive from the edge of the box that hit the crossbar and crashed into the Al Wakrah goal for what turned out to be the winner.

Rafael Vaz had put Al Khor ahead as early as the fourth minute.

Al Duhail, underlining their determination to make it big this season after failing to clinch a single silverware last time around, dominated possession, with their spearhead Olunga getting good support from Edmilson Junior along the left flank and Ismail Mohammed along the right. In fact, Al Duhail easily overcame the early jolt when new recruit Rafael curled in a free-kick past the outstretched hand of goalkeeper Salah Zakaria, who dived full-length to his left.

Al Duhail succeeded in drawing parity late in the half when Olunga tapped in a short cross from Ismail Mohammed from almost the goalline after Vaz failed to clear the ball. Edmilson came up with a curling shot in the 45th minute, but Al Khor goalkeeper Baba Djibril blocked it.

Five minutes after restart, Al Duhail, who had started going in full steam, added a second goal through Ismail Mohammed, who sent in a rebound off goalkeeper Djibril after Olunga had first taken the shot.

Al Duhail grew in strength and struck their third goal, as Olunga converted a penalty awarded by referee Khalid Abdulla after he was brought down by Al Khor captain Naif Al Beriki. Khaled rounded off the tally at the fag end of the match with a solo effort, beating Djibril.

Al Duhail thus made a strong start to their campaign under new coach Luis Castro.

Boualem Khoukhi (23rd minute) and Rodrigo Tabata (33rd) minute scored the goals for Al Sadd when The Wolves dominated the proceedings in the first half. In the second half, Al Sailiya put together a much better-coordinated action.

Al Sadd opened the scoring in the 23rd minute when an unmarked Khoukhi deflected a low cross from Bounedjah into the Al Sailiya net.

Exactly 10 minutes later, Bounedjah found Tabata with low cross from the edge of the box. Tabata anticipated the pass well and flicked the ball into the net with ease on first touch. Close to the hour mark, Al Sadd coach Xavi benched Al Haydous and Bounedjah. Goal-scorer Tabata also joined them on the bench a little later as Al Sadd rested key players ahead of the next round.

Al Sailiya nearly pulled off a goal when, in the 63rd minute, Ramin Resaein hit the Al Sadd crossbar on a direct free-kick. Adama Diomande attempted a header off the rebound, but Al Sadd keeper Meshal Barsham pouched the deflection. A few minutes later, substitute Fahad Khalfan drilled a shot from outside the box, but the Al Sadd keeper blocked the move with relative ease.

Neither side managed to score in the second half as Al Sadd picked up three points from the entertaining clash.

By QLNews·0·4 days 10 min ago
The Amir HH Sheikh Tamim bin Hamad Al-Thani delivered a speech at the General Debate of the 76th session of the United Nations General Assembly, which took place at the UN headquarters in New York earlier today.