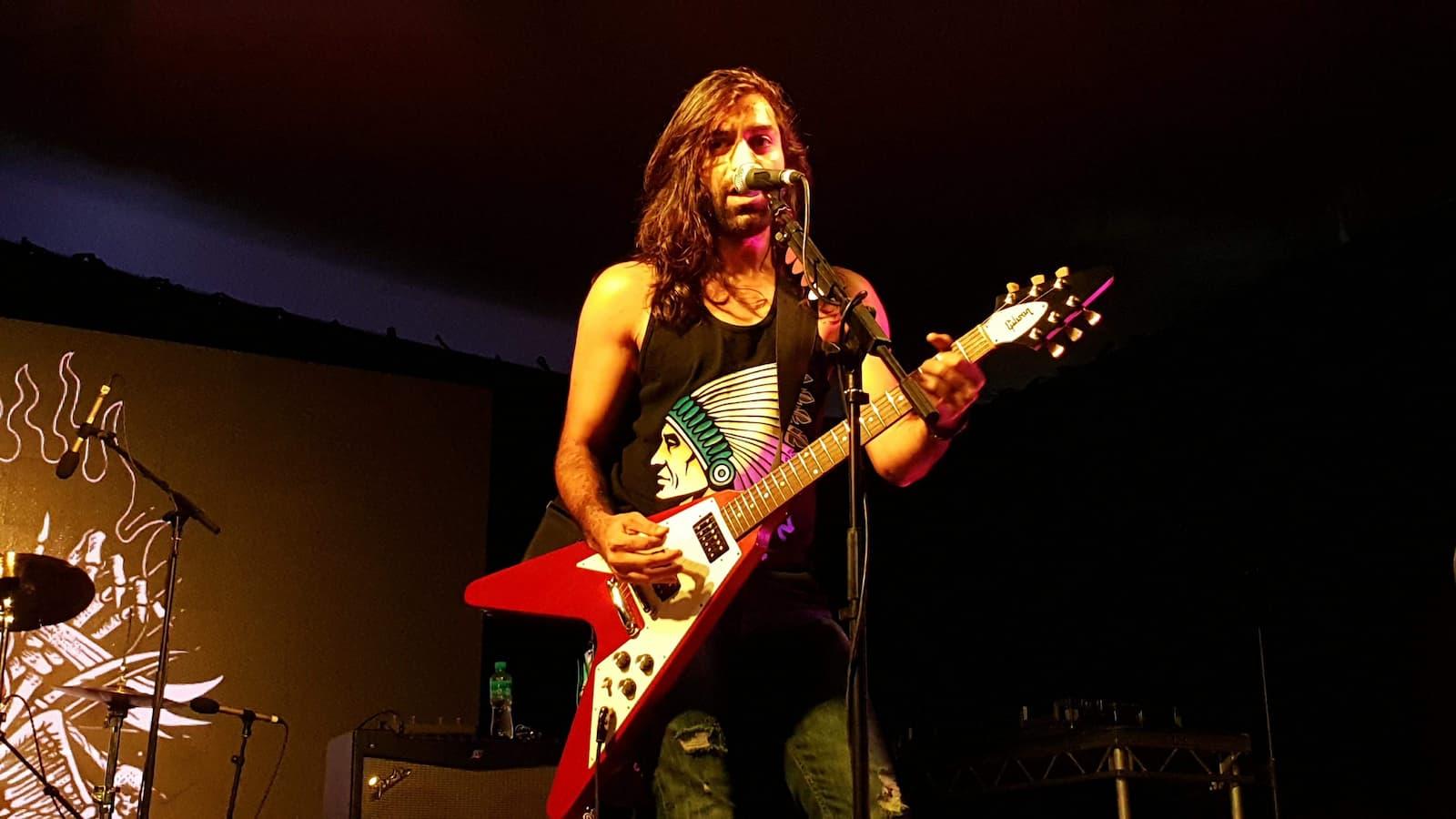 Qatar Living speaks to Naser Al Mestarihi to learn more about his passion being a musician.

Naser was born in 1987. He grew up in Qatar and then moved to the UAE in his late teens where he began pursuing music professionally.

“I have been playing music for nearly two decades and went pro in my early 20s although I’ve been recording and performing since my late teens. I have had three records out as a solo musician (one EP & two LPs) and I am now about to release a new album with Winterburn, the band I currently front,” he said.

Naser studied at Middlesex University majoring in media with a triple concentration in journalism, advertising and PR.

He was born into a family that loved music and that environment had a strong impact on his decision to pursue music professionally.

“My parents got me into music at a young age. My dad introduced me to music predominantly from the 60s, 70s and 80s, giving me tapes by artists like The Beatles, Neil Young, Bryan Adams, ABBA, The Bee Gees and even Khaleeji music. I have got a massive record collection at home, stuff that’s vintage too,” he said.

“When I was just a kid I got a hold of a Guns N’ Roses tape from my uncle and I was pretty savvy with copying tapes using tape decks (which I used to copy it), that’s how I would make mixtapes of new bands I got into like Van Halen, Maiden, Metallica, grunge bands (which were big at the time) but it was hearing Jimi Hendrix perform “Voodoo Child” at Woodstock that really made me want to pick up a guitar,” he added. 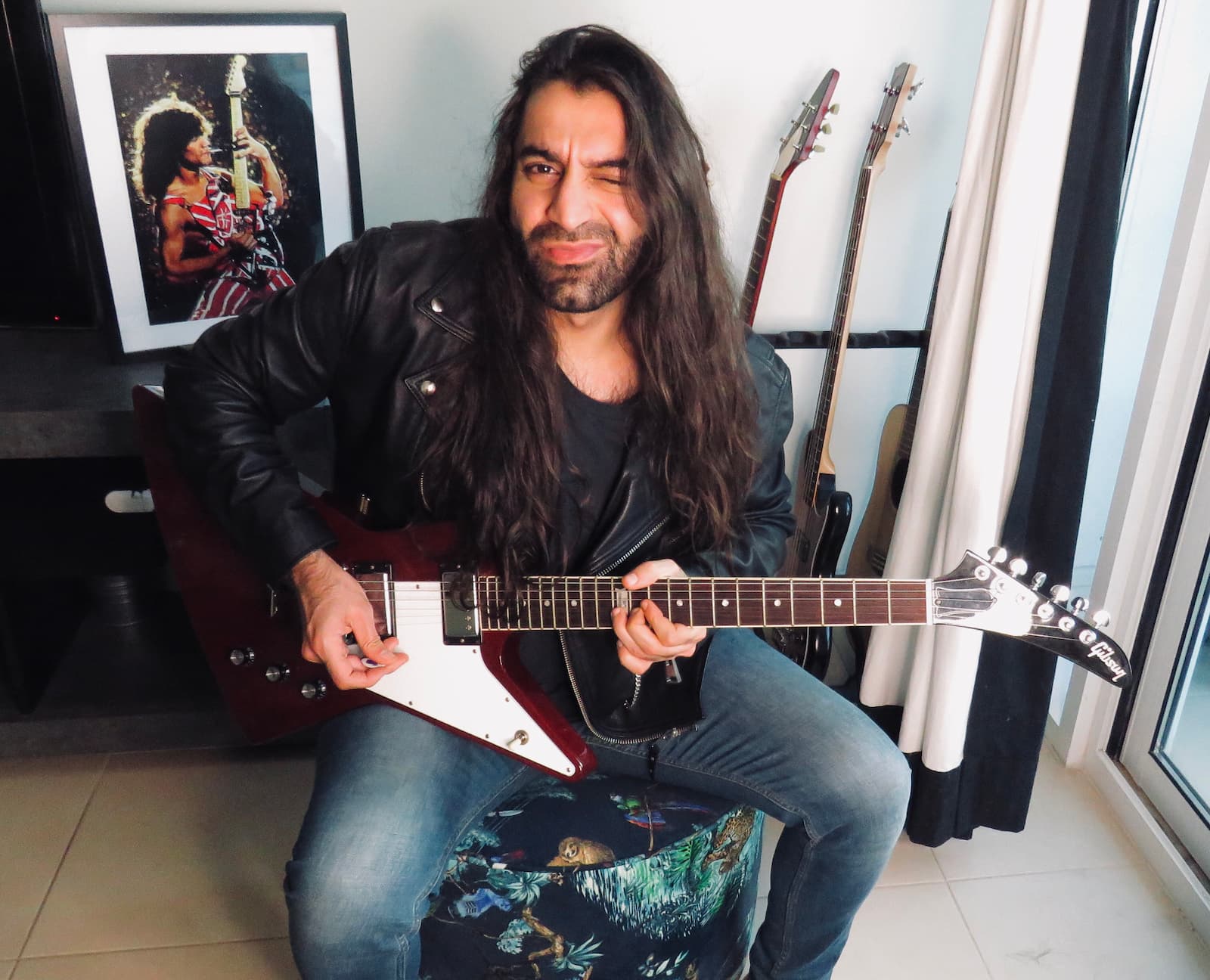 Naser found his inspiration from his past, and everything he grew up with.

“My inspiration comes from various areas, I mean I still listen to all the music I grew up with, in fact the older I get the more I discover little nuances in the playing or techniques that I didn’t notice before. Obviously I love discovering new artists as well but just living life, traveling, watching the news, reading and events that happen all around me play a role in inspiring me when I write music,” he described.

Naser has received acclaim from magazines and publications both regionally and internationally. “1987” his debut LP was at the time the first rock record to be released out of a Qatar-based musician.

He got a lot of support in his journey since he started, locally and internationally.

“I will say I’ve had a lot of positive feedback on my writing and playing from various artists in the industry all the way to LA and the UK, even from some of my heroes that I idolized growing up, who have seen videos of me playing online,” he described. 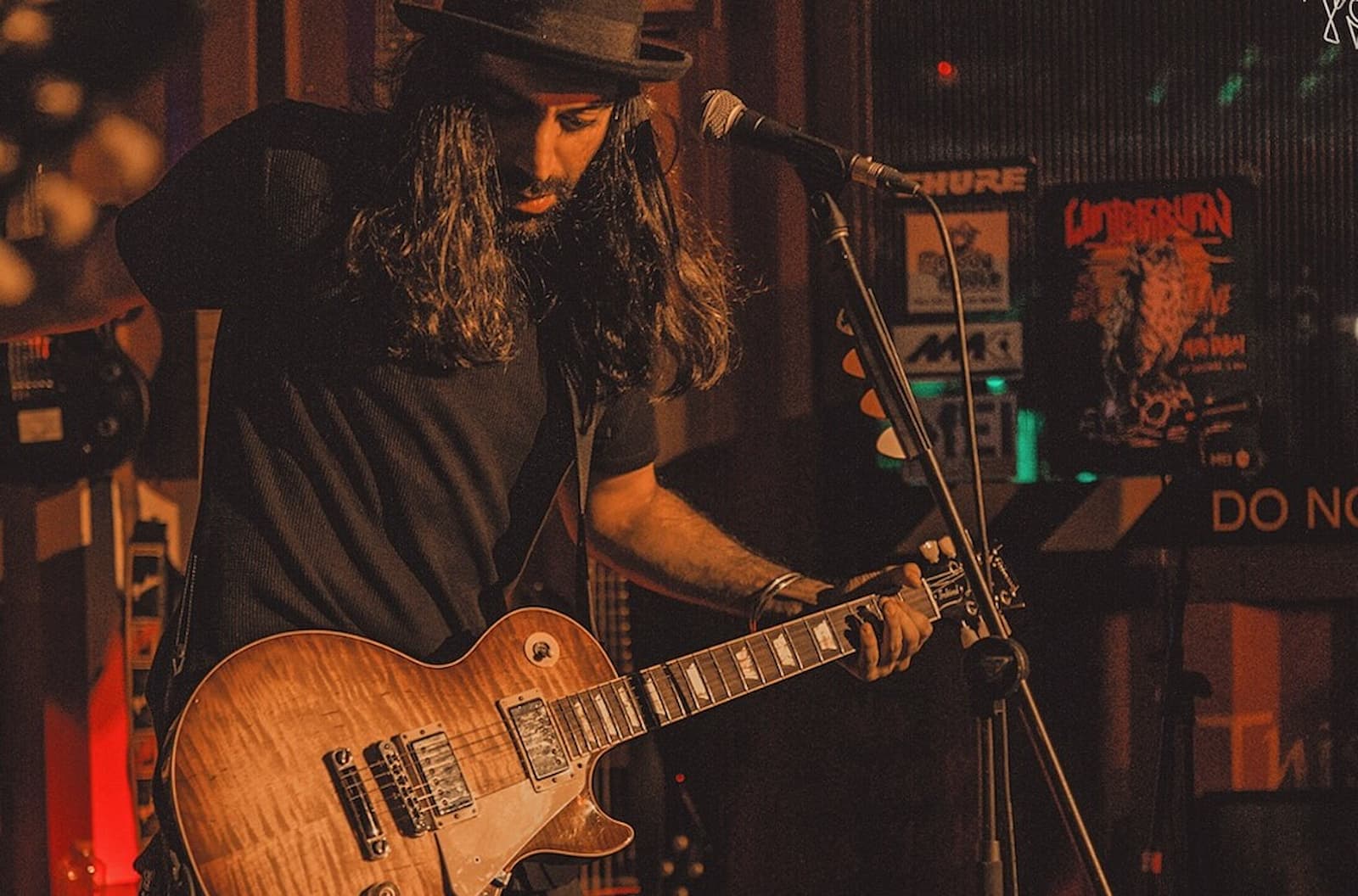 Talking about the challenges he has faced, he said there have been many. One of these was suffering from a Multiple Sclerosis attack.

“While working on Winterburn’s upcoming record I suffered an MS (Multiple Sclerosis) attack which left some minor permanent damage on my hands. I was unaware of what had taken place at the time and as I was regularly traveling between Qatar and Los Angeles, I was so preoccupied with music and my son’s birth that getting it checked out was difficult,” he said.

“When I eventually went back in the studio to finish off the record I had to basically re-learn how to play the guitar as I had lost sensation in critical areas of my hands that impact picking and fretting,” Naser described.

“That was a challenge, to develop a new technique where I could play with the best of my ability despite losing sensation. Thankfully, I put down some of my best playing ever on record and it was almost seamless once I got round to it,” he added.

However, Naser did not stop despite of all that came his way, and he kept fighting through all the ups and downs.

“To be quite honest my playing has advanced so much since I was diagnosed despite the physical impact and that’s the irony of it all. Despite the ups and downs of this disease, I am very focused and determined on delivering the best performances in the studio or live, so when people watch my videos or hear my music, they have no clue that sometimes it’s almost like I’m fighting an uphill physical and mental battle to deliver the goods, despite the constraints of this illness,” he described. 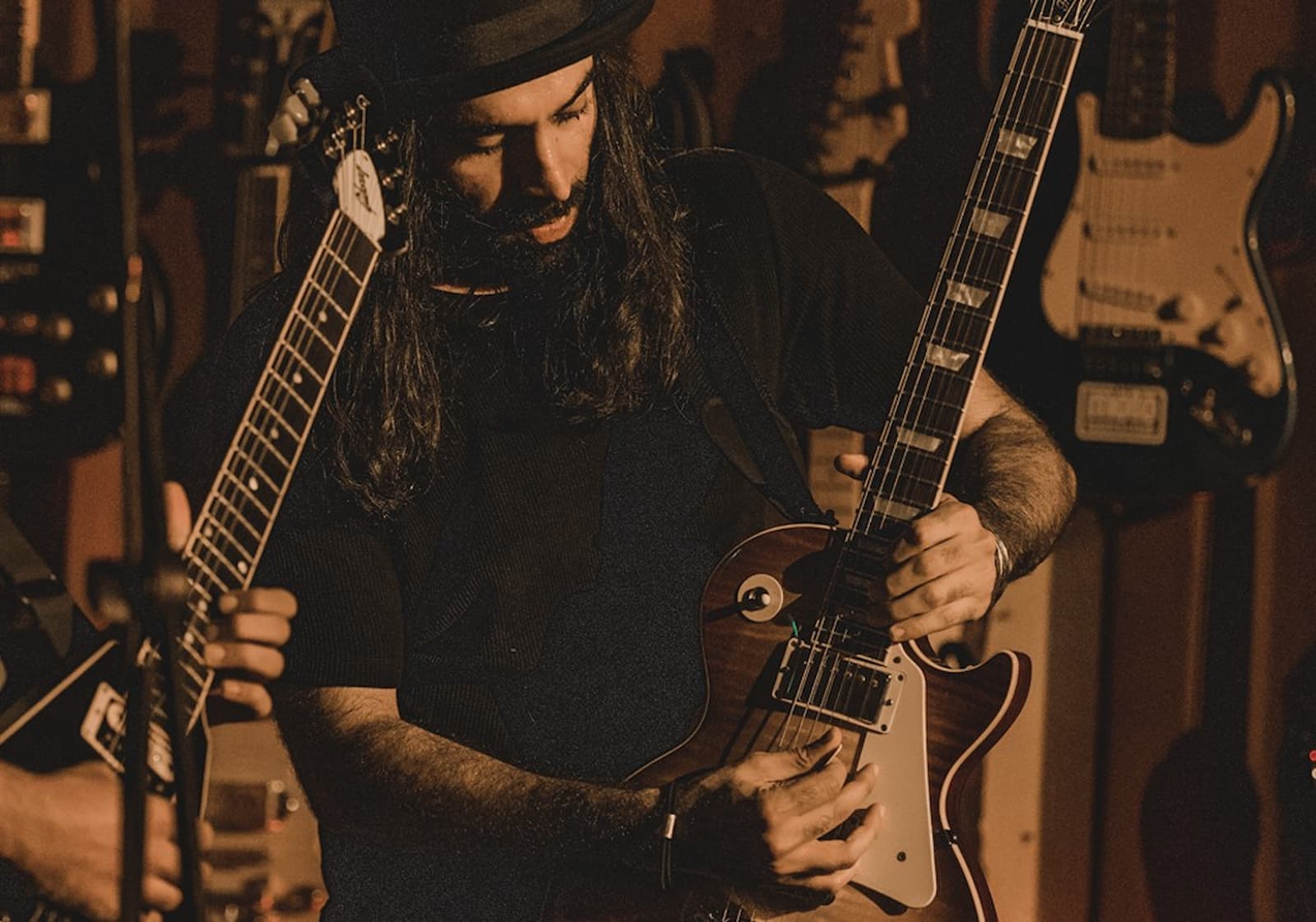 Based on his experience as a musician, the biggest lesson that he has learned since he started is to “keep pushing and playing regardless of the challenges he faces because giving up is never an option if you want to achieve your goals,” he mentioned.

“The music industry is difficult, especially with the status quo where everything is so digitally orientated, so you’ve just got to learn how to adapt to the times and never stop learning. I still learn, I still practice and study music all the time,” he added.

COVID-19 has affected everyone personally and professionally, and it is still taking a huge space in our lives. Naser was affected professionally as one of his records had been on hold since 2019 due to the lockdown.

“We had finished mixing and mastering a fantastic record in 2019 with Grammy Award drummer Thomas Pridgen. I worked really hard on the record and just as we were gearing to book an international tour and album release campaign the pandemic hit. We had just had a terrific launch for the new band in Dubai and next thing you know we’re in a lockdown. So, the record has been on hold since 2019,” he said.

“Being separated from my band, as they’re based in Dubai, has also been a challenge. We haven’t even been able to shoot or film promos because of the pandemic and obviously from a medical standpoint having MS made it scary for me in terms of catching this virus, since medical professionals were unaware of the severity an infection could have had on my health,” he added.

Despite all of this, Naser never gave up and once this situation settles, he will get his debut Winterburn record out.

Naser concluded by sending a message to the younger generation saying, “Never give up, in the words of Juan Manuel Fangio -Always strive to be the best but never believe you are-,”

To know more about Naser Al Mestarihi and his work, you can check out his Instagram page: @nasmestarihi 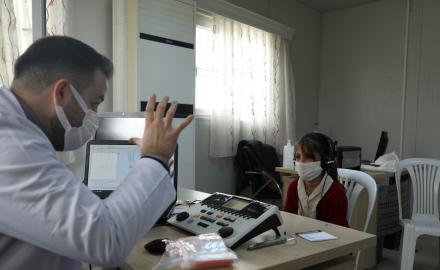